Republican Sen. Lindsey Graham called for Democratic Sen. Amy Klobuchar, his colleague on the Senate Judiciary Committee, to apologize to Supreme Court nominee Brett Kavanaugh over the "smear campaign" against him. Graham has been a vocal supporter of Kavanaugh as he faces allegations of sexual misconduct by multiple women, and has unloaded on Democrats multiple times recently, most notably during a hearing last week where Kavanaugh and accuser Christine Blasey Ford testified. Graham accused Democrats of spurring an "unethical sham."

In an interview with Fox News host Sean Hannity on Wednesday night, Graham referred to an incident during Kavanaugh's testimony when Klobuchar asked the judge about his drinking habits.

"This is the one that bothers me the most: he apologized to Amy Klobuchar for snapping at her. What would you do if you were accused of all these things and had your life ruined?" Graham said about Kavanaugh's testimony. "Here's what I think: Amy Klobuchar should apologize to Judge Kavanaugh and his family for being part of a smear campaign I haven't seen in over 20 years in politics."

When Klobuchar questioned Kavanaugh, she prefaced her question on his alcohol use by discussing her own father's struggle with alcoholism. She then stated that many of his college associates had said in news reports that Kavanaugh was a heavy drinker in his youth.

"Was there ever a time when you drank so much you couldn't remember what happened, or part of what happened, the night before?" Klobuchar asked Kavanaugh.

"You're asking about a blackout. I don't know, have you?" Kavanaugh responded, turning the question on Klobuchar.

"Could you answer the question, Judge? So, that's not happened. Is that your answer?" Klobuchar asked.

"Yeah, and I'm curious if you have," Kavanaugh said.

"I have no drinking problem, Judge," Klobuchar responded.

"Nor do I," Kavanaugh said at the end of Klobuchar's questioning.

After the hearing reconvened after a recess, Kavanaugh apologized for his glib response to Klobuchar's question.

"Sorry I did that," he said. "This is a tough process. I'm sorry about that."

"I appreciate that," Klobuchar said. "I'd like to add when you have a parent that is an alcoholic, you are pretty careful about drinking."

Klobuchar told "CBS This Morning" the following day that she was unsatisfied with Kavanaugh's answer.

"I was thinking that if I was in his courtroom and acted like that, he would have thrown me out," Klobuchar said. "And I appreciated that he apologized, but at the same time, he didn't really answer the question. And what I was trying to get at was that you have this incredibly convincing testimony in the morning from Dr. Ford."

Klobuchar wrote extensively about her father's problems with alcoholism in her 2015 memoir, "The Senator Next Door." 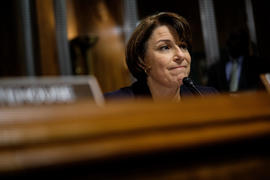