By Ed Leefeldt MoneyWatch October 5, 2018, 9:00 AM Car and deer collisions are now fewer but costlier

Here's some good news for drivers, but even more so for America's deer, elk, moose and caribou population. Car crashes with these four-legged creatures have gone down during the last year by about 10,000, to 1.33 million, according to an annual survey conducted by State Farm, the largest domestic auto insurer.

But it's not good news for State Farm, or any other auto insurer, because the cost of the average encounter with any one of these animals has risen $162, to $4,341 over the same time period. A male deer, including antlers and sharp hooves, can weigh up to 300 pounds.

Now in its 16th year, the survey was conducted between July 1, 2017, and June 30, 2018, and includes data from the Federal Highway Administration and State Farm's own claims.

In which state are driver most likely to hit a large animal? Topping the list of most dangerous states for the 12th consecutive year was rural West Virginia. Within the Mountain State, the likelihood of filing an auto insurance claim involving a deer was one in 46, although, as elsewhere, it was lower than the previous year.

Other states in which both animals and autos were most likely to face this type of damage were Montana, Pennsylvania and Wisconsin. Desert states, such as California and Nevada, had the lowest rates for these destructive encounters.

The catch-phrase "deer in the headlights" turns out to be true, since most animal accidents occur between dusk and dawn. It implies that deer are essentially stupid and freeze in front of oncoming cars. But the counterargument is that deer are actually becoming smarter than motorists. As their habitats shrink from overbuilding, these animals manage to survive and can now be seen on street corners waiting for traffic to subside.

By contrast, overall motor vehicle accidents and fatalities continue to rise, according to the National Highway Traffic Safety Administration. During 2016, the last year NHTSA has reported, highway deaths rose 5.6 percent, to 37,461.

But during one particular time of year, deer and other animals are highly vulnerable: mating season — October through December — when they're not as focused on safety. State Farm points out that it's also the season when hunters invade the animals' habitat and the gunshots disorient them.

Deer could be getting smarter, but they're also becoming fewer. One statistic shows that the population of the most common type, the white-tailed deer, has actually declined somewhat with only 30 million deer as opposed to 33 million at their height.

This might be attributed to the fact that they're being pursued by about 10 million hunters who spend around $6 billion to do so. But hunters might argue that if they don't, the deer population could double in only two years, increasing the likelihood that your car would be prone to such an encounter.

State Farm doesn't have an answer to the question of why deer-car collisions have dropped, particularly since the previous 2016-2017 survey showed an all-time high for such accidents. "We can't attribute the change to anything specific at this time," said spokesperson Rachael Risinger. "We'll need to keep watch the next few years to determine if it's a trend."

But State Farm does have some advice for those trying to avoid tangling with deer, at least while driving:

If your auto insurance policy includes comprehensive coverage, it will likely pay to repair the damage to your car. 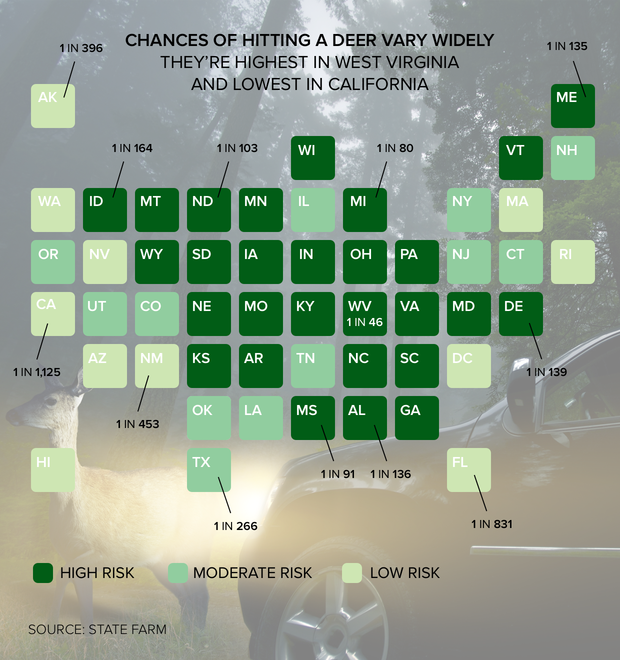 House on path to approve $15 minimum wage for workers

Minimum wage would be $33 today if it grew like Wall...