A New York Times article accusing President Donald Trump and his family of dodging hundreds of millions in taxes has raised questions about how such conduct could've happened under federal tax authorities' noses. One explanation: Far fewer authorities are poking their noses in Americans' tax returns, reducing the odds of getting flagged for cutting corners, or even committing outright fraud.

Of the more than 245 million tax returns the IRS processed in 2017, only 1 in 160 individual returns — 0.6 percent — was audited. That marks a sixth consecutive annual decline in audits, and amounts to the lowest level in 15 years. About 934,000 returns were audited in 2017, the lowest number since 2003, according to agency data.

Richer Americans, who historically are more likely to attract the IRS' attention, are also facing less scrutiny. Among households with income above $1 million, 4.3 percent faced audits last year. That's less than half the 9.5 percent rate in 2015, and the lowest audit rate for millionaires since the IRS first began tracking it in 2004. The audit rate for taxpayers earning $200,000 or less fell last year to 0.6 percent, the lowest level since 2002.

"It's such a small percentage to start with, and it keeps going down," said Fred Slater, a Manhattan CPA, of taxpayers facing audits.

Andy Mattson, a certified public accountant at Moss Adams in Silicon Valley, said there's been a "noticeable, tangible, obvious decline in the level of audit activity," a trend he chalks up to a decline in IRS funding.

Starting in 2011, the GOP-led Congress repeatedly slashed the IRS budget, which fell from $12.1 billion in 2011 to $11.2 billion by 2017. Over that time the agency thinned the ranks of its enforcement personnel by roughly a third.

The departures included many highly trained tax pros, replaced mostly by lower-level clerks and by software that flags returns that deviate from statistical norms. As a result, the IRS is badly outgunned, especially when facing the squadrons of lawyers and accountants employed by high-income filers.

"The level of what [the IRS] has versus the private side is night and day," Slater said, comparing it to a boxing match between "a professional and a rank amateur."

Who's most likely to get audited?

While fewer Americans are getting audited, two groups of tax filers are more likely to attract scrutiny: people in higher tax brackets, and those who report little or no income at all, according to IRS figures. Last year, filers reporting no income were audited at a rate 3.3 percent; 0.8 percent of those reporting income of $1 to $24,999 faced audits.

The agency's audit numbers exclude computer-generated "document-matching" requests, which call on the taxpayer to explain any discrepancies between what's on a return and information reported by a bank or another third party.

Avoiding an audit is largely a matter of staying under the radar. Slater points to former Trump campaign chairman Paul Manafort as a prime example of someone whose fraudulent financial dealings might have remained in the dark if not for his high-profile political work.

"If he hadn't taken the job with the president, he would have never been caught," Slater said.

One way of getting unwelcome attention from the IRS — taking a lot of deductions despite a lower level of income.

"The income reported is compared to deductions taken to determine which taxpayers have a higher percentage of deductions within their income bracket," explained John Vento, a CPA in Staten Island. "If you have many deductions above the normal range, your tax return is more likely to be red-flagged for an audit."

Americans who are self-employed and do their own taxes are also more likely to be audited, as it's more cost effective for the IRS and state tax agencies. "When you have a professional in between," Slater said, referring to an accountant or other trained tax prepared, "the longer it takes and the less profitable it is" for tax authorities to conduct an audit. 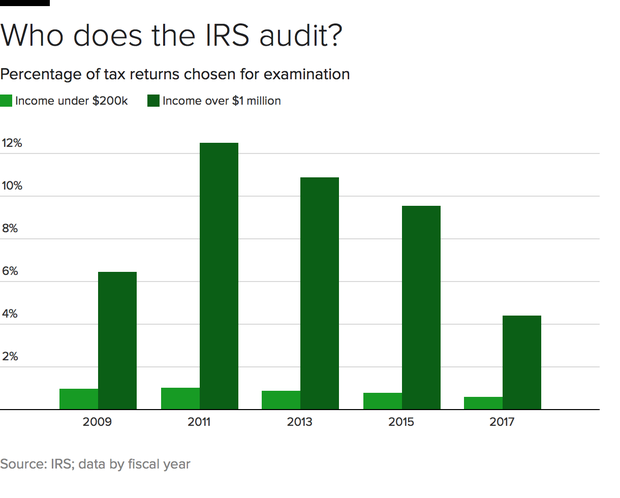