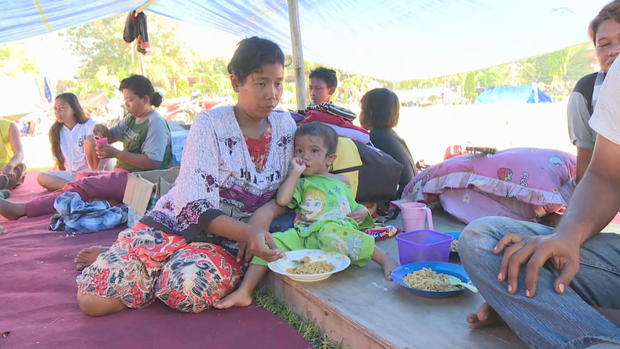 PALU, Indonesia — Indonesian marines are pouring into the area devastated by an earthquake and tsunami to help with rescues. The death toll climbed overnight to more than 1,420 and Indonesia has still not evacuated all of the injured, six days after the disasters.

More than 70,000 people in the hard-hit city of Palu are now homeless, reports CBS News' Ben Tracy. There is no running water or electricity and nowhere to buy food, but the Indonesian military finally arrived Thursday with supplies including boxes of water, instant noodles and giant sacks of clothes. All of it is desperately needed at the many makeshift camps that have sprung up all over the disaster zone for the homeless.

A woman named Endang told CBS News she's been living in one of the camps with her 1-year-old girl Wuhan since the disasters struck. A tent is their only protection from the 90-degree heat, and they've been forced to drink water from the nearby river, which is also being used as a toilet. Trash is overflowing everywhere and burning in the streets. She has no idea how long she'll be there.

Her home was wiped out by the tsunami triggered by the 7.5 magnitude earthquake last Friday. The scars on her daughter's face are from being rolled by the tsunami waves. She says it's a miracle they found her alive.

Another man at the camp was walking around wearing a sign that says he's looking for his wife and son. He hasn't seen them since the earthquake. He's holding out hope that they may still be alive, though every home in his neighborhood was reduced to piles of debris.

In that area, more than 700 homes were destroyed by the earthquake. There is so much debris and so little to move it with that it's hard to imagine how long it will take to find all the people who are likely buried there.

Sadly, crews are expecting to find many more victims. There is a mass burial every day, and the city just dug a second mass grave because the first one is already full. 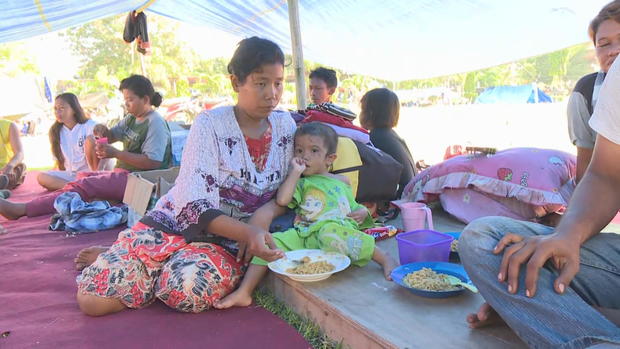