Barnes & Noble is hoping for a storybook ending. The ailing bookseller said Wednesday that it's exploring strategic alternatives, including a possible sale of the company.

One possible buyer: Barnes & Noble founder and Chairman Leonard Riggio, the company said in a news release, while noting that "multiple parties" had expressed interest in bidding for the company.

News that it could strike a deal to be acquired pepped up Barnes & Noble shares, which have sagged in recent years. After vaulting 21 percent following the close of trading on Wednesday, the stock climbed another 20 percent on Thursday, pushing the price to highest level since January.

Barnes & Noble, which is publicly listed, is the nation's largest retail book vendor, operating 629 stores across the U.S. It also operates Nook, a digital bookstore, as well as the website barnesandnoble.com.

Annual revenue, which topped $7 billion in 2012, has since fallen to $3.7 billion amid ferocious competition from Amazon and other e-commerce companies. In September, Barnes & Noble reported quarterly revenue of $795 million, down nearly 7 percent from a year ago, as store sales continued to sink. It lost $17 million for the period.

Once demonized for killing off local bookstores with its superstores, Barnes & Noble has been struggling in recent years with competition from Amazon and changing consumer preferences.

"If they can pull something out to save the company that would be great, but they have a real uphill climb," said Craig Johnson, president of Customer Growth Partners. "They've hung in there despite Amazon and all the rest of it. But the bookstore that solely sells books and periodicals is unfortunately a relic of the past."

Despite the strong headwinds facing brick-and-mortar retailers, some analysts believe there's still a place for bookstores in readers' hearts.

"Consumers want unique experiences and escapes — we think they are finding that in independent bookstores," said David Schick, managing partner at Consumer Edge Research. "Consumers want to feel a connection to their stores. We do believe Barnes & Noble can make some enhancements that could matter, but it will take time and investment."

Riggio served as CEO from when Barnes & Noble was founded in 1986 through 2002 and then again from late 2016 through April 2017. The company has run through four CEOs in the past five years.

Whoever buys Barnes & Noble will have to find a way to bring something more to the table besides selling books, which are often available cheaper elsewhere, Johnson said.

"If it is Riggio, if he had some secret sauce to reinvent the bookstore for the 21st century, why hasn't he done that in his time there?" Johnson asked.

One ongoing sore spot for Barnes & Noble is its Nook division, which along with its electronic reader, co-branded tablet and other tech also sells digital books and magazines. The company in 2014 bought out Microsoft's share of a partnership to develop the reader, and also acquired a stake owned by British publisher Pearson.

Management at Barnes & Noble also has been turbulent in recent months. In July the company announced that CEO Demos Parneros had been fired for unspecified violations of company policy. Parneros has since filed a lawsuit against the company demanding millions in severance and portraying Barnes & Noble in a bad light. 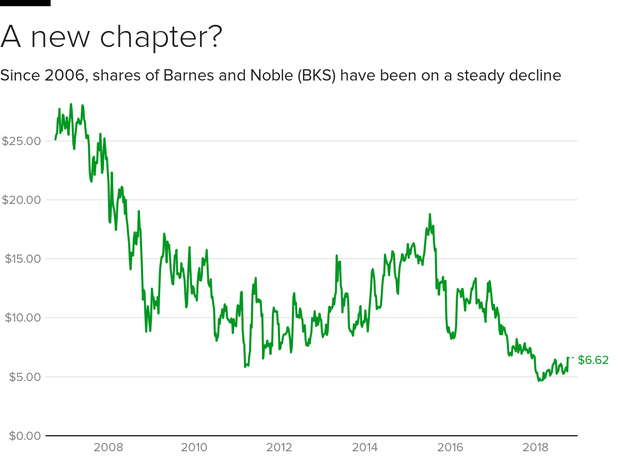 Lyft riders can soon dial 911 from the app