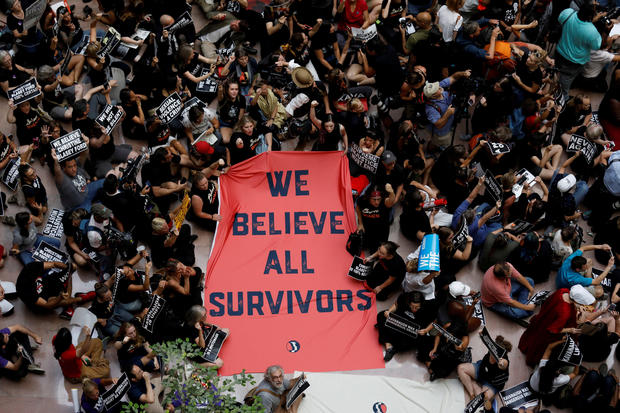 Protesters opposed to Supreme Court nominee Brett Kavanaugh took over a Senate office building on Thursday, with actresses Amy Schumer and Emily Ratajkowski among the demonstrators detained. The Senate will hold a procedural vote on Kavanaugh's nomination on Friday, setting in motion a possible final vote on Saturday.

New York Sen. Kirsten Gillibrand addressed protesters, telling them, "This is a moment about all of you — all of you are speaking truth to power because you care about the future, you care about our children, you care about who is leading this country and who sits on the highest court in the land."

Capitol police said about 300 people were detained. In a video shared widely on Twitter, Schumer said "I think we're going to get arrested."

A supplemental FBI report on Kavanaugh was reviewed by senators on Thursday. Republican Judiciary Committee Chairman Chuck Grassley said the reported contains "no hint of misconduct," but Democrats have called it incomplete. At Thursday's protest, Gillibrand called it a "cover for those who don't want to look at the truth."

Diane Russell, a Democratic official from Maine, told CBS affiliate WUSA-9 that she had a message for Republican Sen. Susan Collins, considered one of the key swing votes.

"If she turns on women, Maine women will turn on her," Russell said.

Collins said Thursday she thought it appears the FBI had conducted a "very thorough investigation."

Protesters cheered when news broke that another swing vote, Nebraska Democratic Sen. Heidi Heitkamp, would be voting no on Kavanaugh.

Senate Majority Leader Mitch McConnell said Wednesday that Republicans would not be deterred by protesters.

"There is no chance in the world they're going to scare us out of doing our duty," McConnell said on the Senate floor.

Protester Barbara Smith, 67, told WUSA as she waved a sign that featured photos of her grandchildren that it was "unreal" that she had to protest again.

"My job as a grandmother is to do what I can to make sure that they're going to be safe and that they'll never have to say, 'Me Too,'" Smith said.

Other protests took place across the country, including outside Trump Tower in New York City. 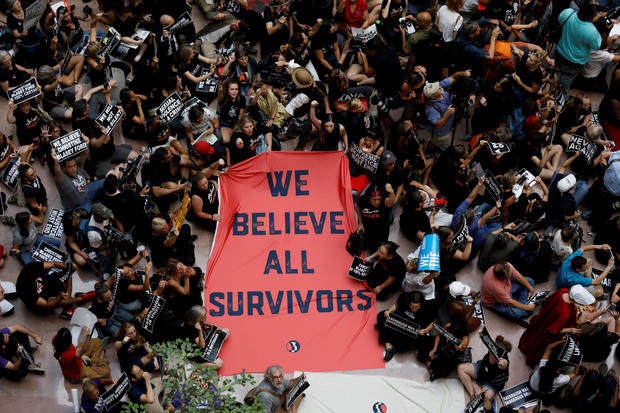