DUBAI, United Arab Emirates — President Donald Trump says Saudi Arabia's king "might not be there for two weeks" without U.S. military support, further increasing his pressure on one of America's closest Mideast allies over rising oil prices. As crude oil prices reach a four-year high, Mr. Trump repeatedly has demanded OPEC and Saudi Arabia, the world's biggest oil exporter, push prices down. However, analysts are warning prices could go up to $100 a barrel as the world's production is already stretched and Mr. Trump's sanctions on Iran's oil industry take effect in early November.

Criticizing America's longstanding military relationships with allies has been a hallmark of Mr. Trump's presidential campaign and his time in office. He returned to the theme Tuesday night in Southaven, Mississippi, mentioning both Japan and South Korea.

However, Mr. Trump's comments on Saudi Arabia implied the kingdom's Al Saud monarchy, which oversees the holiest sites in Islam, would collapse without American military support.

"We protect Saudi Arabia — would you say they're rich?" Mr. Trump asked the cheering crowd. "And I love the king, King Salman, but I said, 'King we're protecting you. You might not be there for two weeks without us. You have to pay for your military, you have to pay.'"

Mr. Trump didn't elaborate on when he made the comments to Saud Arabia's 82-year-old monarch. Mr. Trump and King Salman last shared a reported telephone call on Saturday, in which they discussed "efforts to maintain supplies to ensure the stability of the oil market and ensure the growth of the global economy," according to the state-run Saudi Press Agency.

There was no immediate reaction Wednesday in Saudi Arabia to Mr. Trump's remarks. Riyadh has worked to cultivate warm relations with Mr. Trump after having rocky moments with former President Barack Obama.

Saudi Arabia welcomed Mr. Trump for his first overseas trip as president. His administration, particularly his son-in-law Jared Kushner, has sought a close relationship with King Salman's son Mohammed bin Salman, the country's crown price and next in line to the throne.

But oil prices seem to be getting in the way, especially as benchmark Brent crude oil is near $85 a barrel – a four-year high. Trump in July tweeted without evidence that Saudi Arabia would increase its production "maybe up to 2,000,000 barrels" a day. Saudi Arabia currently produces some 10 million barrels of crude oil a day. Its record is 10.72 million barrels a day.

Meanwhile, U.S. gasoline prices are up ahead of November midterm elections in which Trump already faces political headwinds. The average price for a gallon of regular gasoline in the U.S. is $2.88, up from $2.55 a year ago, according to AAA.

"OPEC and OPEC nations are, as usual, ripping off the rest of the world, and I don't like it. Nobody should like it," he said. "We defend many of these nations for nothing, and then they take advantage of us by giving us high oil prices. Not good. We want them to stop raising prices. We want them to start lowering prices and they must contribute substantially to military protection from now on." 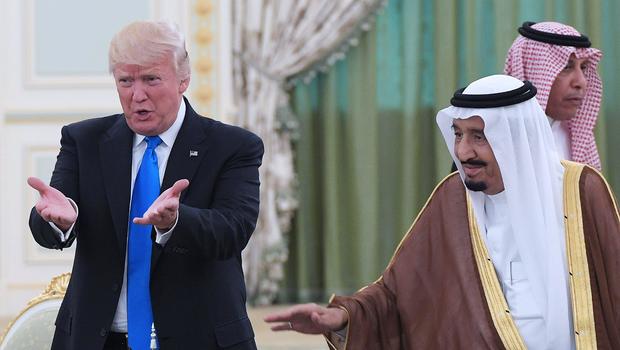 Flu season may be bad due to economic reason: Full employment