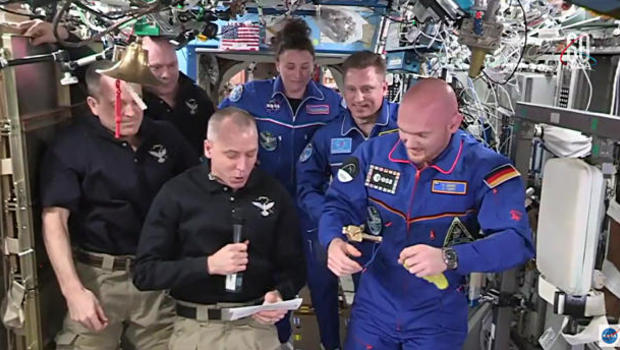 A cosmonaut and two NASA astronauts finished packing up their Soyuz ferry ship Wednesday and prepared to undock from the International Space Station early Thursday for a fiery descent to touch down on the steppe of Kazakhstan. The trip closes out a 197-day mission that included four spacewalks, a full slate of research and an emergency leak repair.

With commander Oleg Artemyev at the controls, flanked on the left by flight engineer Drew Feustel and on the right by Ricky Arnold, the Soyuz MS-08/54S spacecraft was scheduled to detach from the station's space-facing Poisk module at 3:57 a.m. EDT (GMT-4) to kick off a three-hour, 48-minute trip home to Earth.

Feustel, outgoing commander of the Expedition 56 crew, turned over command of the station to European Space Agency astronaut Alexander Gerst on Wednesday, thanking flight controllers and research teams at the Johnson Space Center in Houston as well as in Russia, Germany and Japan.

"Thanks to those who have trained us and those who have supported us while in space," he said. "With over 350 investigations credited to the expedition, we should all be proud of our accomplishments together. We would also all like to thank our families for supporting us throughout this great adventure. Without their love and support, none of us would be here today."

Gerst, a veteran German astronaut, thanked Feustel "for being a true leader. It was an honor to serve under your command, and it was fun at the same time."

"I want to wish my friends and crewmates, Oleg, Ricky and Drew, a fantastic ride home and (a) soft landing," Gerst said. "You are dearly missed down there on Earth, and you will be dearly missed up here in space."

After undocking, Artemyev and Feustel planned to move the Soyuz MS-08 spacecraft a safe distance away from the space station before firing up the ferry ship's braking rockets 6:51 a.m. EDT.

The four-minute, 39-second burn is designed to slow the Soyuz by about 286 mph, dropping the far side of its orbit into the atmosphere on a trajectory leading back to Kazakhstan.

After a half-hour free fall, the spacecraft's three modules will separate and the central crew cabin, the only one with a protective heat shield, will slam into the discernible atmosphere at an altitude of about 62 miles.

If all goes well, the descent module, suspended beneath a single large parachute, will settle to a rocket-assisted touchdown near the town of Dzhezkazgan at 7:45 a.m. EDT (5:45 p.m. local time). That would result in a mission lasting 196 days and 18 hours, covering 3,152 orbits and 83.4 million miles since blastoff from the Baikonur Cosmodrome on March 21.

As always, Russian recovery crews were expected to be waiting nearby to help the three returning station fliers out of the cramped cabin as they begin readjusting to gravity after six-and-a-half months in space.

Following brief medical checks, all three will be flown by helicopter to Karaganda, where they will be officially welcomed back to Kazakhstan. From there, Artemyev will fly home to Star City, near Moscow, while Feustel and Arnold head back to their homes in Houston.

With touchdown, Artemyev's total time in space over two station visits will come to 366 days. Feustel, a veteran of three flights, including a mission to repair the Hubble Space Telescope, will have logged 226 days aloft. Arnold's total over two station flights will stand at 210 days.

They also staged four spacewalks. Feustel and Arnold carried out three excursions in March, May and June to perform routine maintenance while Artemyev joined Prokopyev in August for work on the Russian segment of the station.

Feustel has now walked in space nine times, totaling 61 hours and 48 minutes, moving him up to third on the list of the world's most experienced spacewalkers.

The Expedition 56 crew also dealt with a small leak in the Soyuz MS-09/55S spacecraft that carried Prokopyev, Gerst and Auñón-Chancellor to the station in June. The leak was discovered in the upper module of that ferry ship, prompting a quick repair job by Artemyev and Prokopyev, who sealed it with epoxy-soaked cloth.

The leak appeared to be the result of a hole deliberately drilled into the side of the module, but an investigation is not yet complete. Dimitri Rogozin, director general of the Russian space agency Roscosmos, stirred controversy when he suggested the hole could have been drilled on the ground or in space.

That prompted a pointed response from Feustel during an interview later.

"I can unequivocally say that the crew had nothing to do with this on orbit, without a doubt, and I think it's actually a shame and somewhat embarrassing that anybody is wasting any time talking about something that the crew was involved in," Feustel told ABC News.

Prokopyev, Gerst and Auñón-Chancellor will have the space station to themselves until Oct. 11, when Soyuz MS-10/56S commander Alexey Ovchinin and flight engineer Tyler "Nick" Hague arrive six hours after launch from the Baikonur Cosmodrome.

Soyuz spacecraft are designed to fit crews of three, but in this case a cosmonaut specially trained to work with a new Russian laboratory module was pulled from the MS-10 flight because the lab's launch has been delayed.

Gerst and Hague plan to venture outside the space station on Oct. 19 and 25 to install the six batteries that were carried up aboard the HTV-7 cargo ship. That will set the stage for the long-awaited debut of new commercial crew ferry ships being built by SpaceX and Boeing to end NASA's post-shuttle reliance on the Russian Soyuz for transportation to and from the station.

Late this year or early in 2019, SpaceX hopes to launch its commercial crew Dragon ferry ship on an unpiloted test flight to the station. The capsule is expected to rendezvous with the laboratory and autonomously dock with the outpost before returning to an ocean splashdown about a month later.

In the meantime, station crews will continue to rotate up and down aboard Soyuz spacecraft. On Dec. 13, Prokopyev, Gerst and Auñón-Chancellor plan to return to Earth aboard the Soyuz MS-09/55S spacecraft. They will be replaced by the Soyuz MS-11/57S crew, made up of commander Oleg Kononenko, NASA astronaut Anne McClain and Canadian astronaut David Saint-Jacques. They are scheduled for launch on Dec. 20.

Boeing hopes to launch its Starliner crew capsule on an unpiloted demonstration flight early next year that will mirror SpaceX's, complete with an autonomous rendezvous and docking. If all goes well with those flights, the companies will press ahead with preparations to launch the crew Dragon and Starliner on piloted test flights later in the spring.

On April 5, the Soyuz MS-12/58S spacecraft will deliver Oleg Skripochka, NASA astronaut Christina Koch and a United Arab Emirates guest astronaut to the station, temporarily boosting the lab's crew to eight. Ovchinin, Hague and the UAE crew member will return to Earth April 15, leaving five aboard the lab complex.

It is roughly around this time that SpaceX hopes to launch the crew Dragon on its first piloted test flight, carrying shuttle veterans Bob Behnken and Douglas Hurley to the space station. They plan to test a variety of manual and automated procedures to verify the spacecraft's readiness to begin routine crew ferry flights later in the year.

According to current schedules, Boeing may be ready to follow suit with the first piloted flight of its Starliner spacecraft in the early summer timeframe. On board will be Eric Boe, Nicole Mann and Boeing vice president Chris Ferguson, commander of the final shuttle mission in 2011.

NASA already has modified Boeing's contract to protect the option of extending the first crewed Starliner flight, making it a long-duration operational mission if significant delays are encountered in the commercial crew program. NASA may exercise a similar option with SpaceX.

However it plays out, the final currently contracted Soyuz flight with NASA-sponsored astronauts aboard is scheduled for launch July 24, when the Soyuz MS-13/59S spacecraft carries Alexander Skvortsov, European Space Agency astronaut Luca Parmitano and NASA's Drew Morgan into orbit. Two more Soyuz launches are planned before the end of 2019, but NASA has no seats booked on those missions.

While the advent of U.S. commercial crew ships will end NASA's sole reliance on the Russians for crew transportation, it will not end it. 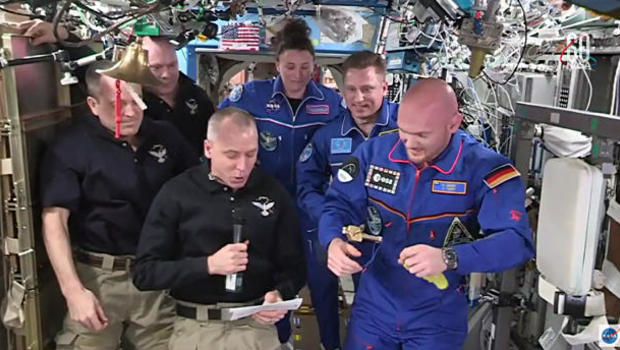 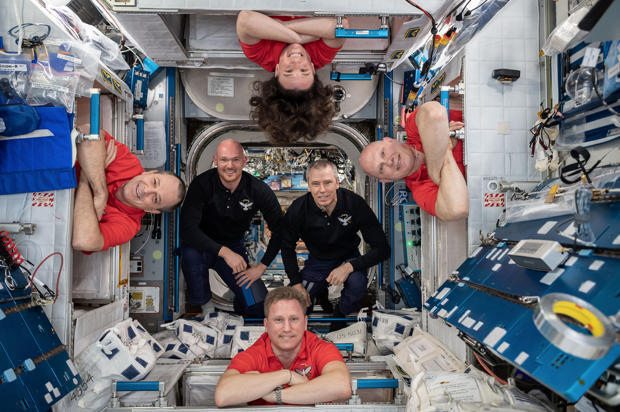 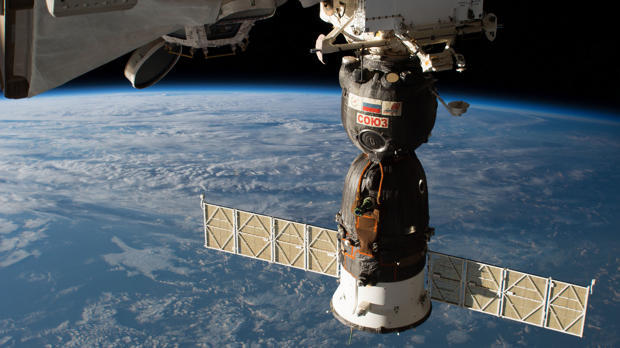 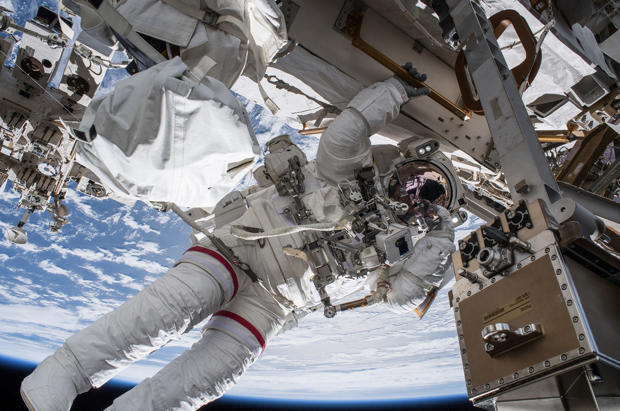 French ambassador returning to Washington after tiff over submarine deal

Group helps “bake” up a brighter future for women in need