John Goodman, Sara Gilbert and Laurie Metcalf are opening up about the cancellation of "Roseanne" as they move forward with spinoff "The Conners." The three talked to People about the moment they heard the news that Roseanne Barr posted a tweet likening former Obama adviser Valerie Jarrett to progeny of the Muslim Brotherhood and "Planet of the Apes" in May.

Goodman, who said of Barr in August, "I know, I know, for a fact that she's not a racist," said he could not believe it when he first heard the news. He said he was in his "kitchen and maybe my daughter or my wife told me" about the tweet.

"It just didn't seem true," Goodman saud. "Then it got true. I was consciously trying to accept it."

Metcalf said she was performing on Broadway and found out about the tweet on the news, and immediately wondered if the show would remain on air.

"And I [first] thought, 'Oh, I wonder if we still have a show,'" she said. "Because of how heavy everything became."

"[I was trying] to reconcile myself to the show being gone," she added. "And you know, coming off such a high, it was hard to wrap our heads around." The "Roseanne" reboot on ABC had stellar ratings.

"It was more just, 'OK, what are we dealing with today?'' she explained. "I was just kind of taking things one step at a time as they came."

Goodman said that coming back on "The Conners" felt right. The actor said it was important to the cast continue the family's story.

"There was the feeling of not wanting it to go away until we were ready," Goodman said. "There was a debt owed to this fictional family. We want to finish telling this story."

Metcalf admitted, "There was a lot of risk involved. But we all decided as a group to take the risk, knowing that we could be judged by deciding to come back."

Goodman said, "We're leaning on each other when we do this show. And supporting each other — that's a very strong feeling among us. It's different, but we can create something new from it. Let us finish the story on our own terms. Come along with us and see how we do."

The actors emphasized that they're grateful to Barr for allowing them to proceed with the spinoff. ABC only signed off on "The Conners" after Barr agreed to relinquish any creative or financial ties to the show.

Barr initially clashed with many of her cast mates after her firing and the show's cancellation. When Gilbert wrote that Barr's comments about Jarrett were "abhorrent" and "do not reflect the beliefs of our cast and crew or anyone associated with our show," Barr wrote back, "Wow! unreal." Since then, Barr has said that she forgave Gilbert and understood her position.

In September, Barr said that her character is killed off as the consequence of opioid addiction on "The Conners." The spinoff is set to premiere on ABC on Oct. 16. 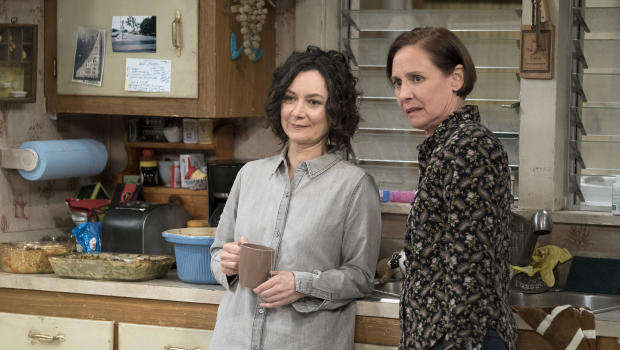