Johnny Depp says he will "never stop fighting" the accusation he assaulted his ex-wife Amber Heard. The actor opened up to British GQ about the allegations and even said he "shouldn't be talking about this."

Though Depp has mostly stayed quiet on Heard's allegations he hit her with her cellphone on her cheek and eye during a fight in May 2016, the actor flatly denied the claims in the new interview. He explained why he did not speak more openly about the incident before.

"To harm someone you love? As a kind of bully? No, it didn't, it couldn't even sound like me," he said. "So, initially, I just kept my mouth shut, you know? I knew it was going to stick on me and it would get weirder. Keep going, you know? Go nuts. I ain't going to get into a pissing contest with someone about it. Spit out what you need to spit out and, you know, my attorneys will take care of the rest. I never went out and spoke about the s**t."

Heard filed a domestic violence restraining order against the 55-year-old actor after the alleged incident and submitted the photo of her bruised face along with the filing. In August 2016, she and Depp reached a divorce settlement of $7 million, which Heard donated to charity.

In the new GQ profile, Depp accused Heard of making life difficult for his family.

"But of course I care what my family and my kids think," he said. "And worse than that, to take away future earnings that are for my kids, you know? I do this s**t for my kids, man. How could someone, anyone, come out with something like that against someone, when there's no truth to it whatsoever? I'm sure it wasn't easy for my 14-year-old boy to go to school, you know what I mean? With people going, 'Hey, look at this magazine, man. What, your dad beats up chicks or something?' Why did he have to go through that? Why did my daughter have to go through that?"

He also claimed Heard did not have any marks on her face the day she claimed she was assaulted, and they showed up later. Depp said he is concerned about his reputation.

"We probably shouldn't be talking about this," said the actor, "but I am worried. I worry about the people that bought it and I worry about her. It's just not right. I will never stop fighting. I'll never stop. They'd have to f**king shoot me. An episode like this takes time to get over."

Depp said he is now happily single and not looking for love. 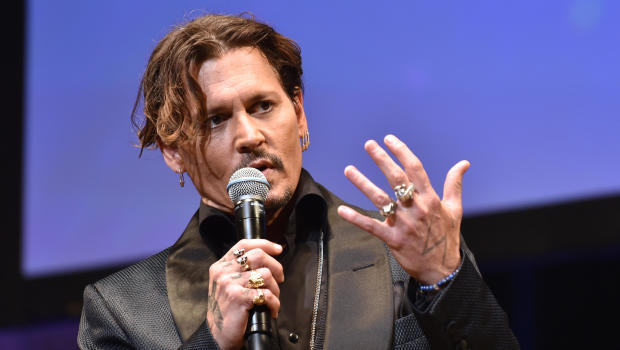