Nobody knew when Sen. Jeff Flake, R-Arizona, would turn up in Boston. First, it was 11:30 a.m. at Emerson Colonial Theatre. Then, it was 1 p.m. on an elevated platform neighboring City Hall. And finally, just before 2 p.m., a voice on stage announced "quite possibly the most newsworthy man in the world right now," and Flake sauntered onto the dais.

He had committed to speaking at this Forbes "Under 30 Summit" months ago, slotted for a book-promotion event Monday morning that was billed only as "The Future of the Republican Party." That was before the sexual assault allegations surfaced about President Trump's Supreme Court nominee, Judge Brett Kavanaugh. It was also before the Senate Judiciary Committee called Kavanaugh and the woman who accused him of sexual assault, Dr. Christine Blasey Ford, to testify before Congress in an open hearing. And it was before Sen. Flake — the "swing vote member" of the committee's GOP majority — leveraged his vote to set in motion a brief supplemental FBI investigation into that very allegation.

The run-up to the Forbes event was already somewhat fraught. Emerson College pulled out of its longstanding commitment to host Flake, citing "security concerns." Sexual assault survivors flanked the stage at City Hall, where Flake was to arrive, alongside congressional candidates Alexandria Ocasio Cortez and Ayanna Pressley. Emerson college students joined the progressive lightning rods in a chorus of "I Can't Be Quiet," a protest anthem handpicked to greet Flake, a lifelong conservative.

Meanwhile, Flake fielded calls on his way to the event, juggling conversations with colleagues and the White House counsel's office to ensure any "current, credible allegation" made against Kavanaugh be investigated.

"Time is up," Emerson sophomore Annie Noel screamed out to protesters rallying on the fringes of the Boston summit. "Me f***ing, too." The crowd erupted, brandishing banners staked high above the coalition of progressive organizers. "Senator Flake, look us in the eye," a red poster board demanded.

After the rally dust settled, and "lunchtime with Secretary John Kerry" wrapped, Flake finally walked on stage, eyes scanning the crowd, assessing the ratio of friendly to not-so-friendly faces. Moderator Randall Lane thanked the Arizona lawmaker for showing up and assured him, "You will be heard."

Flake let out a nervous laugh. "It's nice – maybe – to be out of Washington, for a few hours at least," he smiled, now casting his glance over a group of silent protesters standing in the audience. Flake averted his focus back toward the reassuring moderator, and kept it there.

This has become a familiar ritual for the Republican senator, who has listened to more than his share of angry demonstrators. And he really does listen.

There was the town hall last April in Mesa, Arizona, when Flake met hissing constituents armed with pointed questions about Obamacare. Flake answered the protesters with repeated — almost curious — refrains of "thank you." He stayed late to greet lingering constituents at the base of the stage. Their vitriol eventually seemed to dissipate, overcome by their representative's unrelenting, well-intentioned, smile.

Then, late last week, Flake had a painful elevator encounter with protesters on Capitol Hill that turned viral. Two women – Ana Maria Archila and Maria Gallagher — stood within alarmed doors to share their own stories of sexual assault moments after Flake first announced he would be a yes vote for Kavanaugh. Late for a Judiciary Committee vote, Flake held open the elevator door as Archila cried out. "Do you think that Brett Kavanaugh is telling the truth?"

In a "60 Minutes" interview Sunday, Flake told CBS News' Scott Pelley, "There are a lot of people who are quite angry. There's a planned demonstration in front of my house today," he mentioned in passing.

Back in Boston, Flake pressed for a full investigation. "It does no good to have an investigation that just gives us more cover," he reasoned. "We actually need to find out what we have to find out."

In the audience, the silent protest also persisted, with participants flashing signs bearing the names of sexual assault victims from the Senator's home state. "I am Patte from Tucson," one read. Another, "I am Tracey from Mesa."

As the discussion marched on, Randall Lane shyly offered that politicians on both sides of the aisle were not happy with the Arizona senator. "What does it feel like to be –" The moderator paused. "Kind of, the man without a country?"

Flake raised the microphone to meet his smile. The question had answered itself. "That's what it feels like." The senator chuckled. "It does."

Asked by Pelley whether the week-long pause in the Kavanaugh proceedings would have been possible if he were seeking re-election, Flake laughed. "No, not a chance." He added, "There's no value to reaching across the aisle. There's no currency for that anymore. There's no incentive."

The man without a country tamped down rumors of a 2020 presidential bid from the Boston stage. He called his visit to New Hampshire campus scheduled for later that night "if nothing else, in memoriam of what a Republican Party should be."

Three hours later, Flake greeted audience members at Saint Anselm College before joking about the campus' reputation. "I've always heard that Saint Anselm is a safe place, populated by calm, reasonable people." Audience members chortled, and he let out another nervous laugh. "I'm counting on this today," he quipped, peering down for a moment. "You have no idea." It was the kind of throat-clearing laughter that plays well to campaign crowds – equal parts funny and true.

In weeks prior, he'd titled this New Hampshire speech "After the Deluge." "I hadn't counted on an actual deluge," he said wryly. "So, teachable moment there — be careful what you title things."

In his 27-minute address, Flake referred to the two major political parties as "tribes," telling audiences he'd failed his own for some time now. "I hope to continue to fail my tribe," the Senator added, though his categorically conservative record might reveal otherwise. Flake voted to repeal Obamacare last summer and greenlighted the GOP tax bill. But unlike most of his Republican colleagues, who ultimately embraced Mr. Trump, Flake admits he "never warmed to the president."

This past week, Kavanaugh's march toward Senate confirmation was sent on a detour by Flake and a pair of moderate Republicans — Maine Senator Susan Collins and Senator Lisa Murkowski of Alaska — who together were able to get the president to agree to request the week-long FBI investigation. And the trio could still threaten to withhold confirmation votes if the FBI investigation falls short of their call for a thorough examination of the allegations. Flake's action was remniscent of the late senior senator from Arizona, John McCain, who died over the summer and who was close to Flake. "John was always a mentor to me," Flake reflected. "He always talked about due process and order. Though I don't want to say what he would have done," Flake told reporters Monday.

From the podium at Saint Anselm, he also talked wistfully of another figure who shaped his politics, Ronald Reagan — "brimming with ideas," "full of principle and purpose," "inspiring and idealistic." The Reagan era, he said, "awakened the imagination of a kid from Snowflake, Arizona."

Now, he lamented, there's a modern-day "sickness in our system." The metaphor continued, with Democratic and Republican parties cast as vital organs. "It's as if in order to save ourselves, our brains decide to destroy our hearts." The funereal vibes drew silence from the audience.

"In Reagan's America, we knew where the buck stopped," Flake declared. "Now you can't find that poor buck. It's searching for someone – anyone – to claim responsibility."

Shortly after 5:30 a.m. the next morning, Flake darted through security, boarded an American Airlines jet and settled into his aisle seat in coach.

"Did you see that Senator Flake is here," the gate attendant asked, fluttering around the cabin, asking other flight attendants, "Do you want me to take a photo with him so you can take one of me?" The flight attendants decided against it. It was early. The senator had a long week ahead.

The gate attendant nodded, glancing back at Flake. "I'm so proud of him. Make sure you tell him?"

The flight attendant agreed, circling back to Row 6 to greet the Flake on his way back to Washington. Flake nodded and smiled. The stewardess retreated to the cockpit, the plane pushed back and returned to Washington, where the Arizona senator will spend his remaining weeks, trying to see if anyone can find a place for that poor buck to stop. 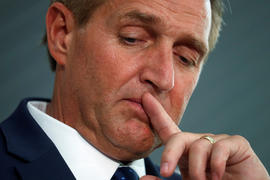