The first person in the famed Forbes 400 ranking to amass a fortune of more than $100 billion, Bezos now has a net worth pegged at $160 billion, up a whopping $75.5 billion from just a year ago, Forbes said. The media outlet attributes the jump in large part to Amazon's stock price soaring more than 100 percent since 2017.

Bezos, who on Tuesday announced a new $15 an hour minimum wage for his more than 300,000 Amazon workers, pushes Gates to No. 2 on the Forbes 400, trailing Bezos by $63 billion with a net worth of $97 billion, according to Forbes.

Berkshire Hathaway's Warren Buffett is the third wealthiest American, with a net worth of $88.3 billion, followed by Facebook founder Mark Zuckerberg at $61 billion, Forbes said. Oracle's Larry Ellison and Google's Larry Page ranked fifth and sixth, worth $58.4 billion and $53.8 billion, respectively. The Koch brothers Charles and David tied for the 7th slot, both holding fortunes of $53.5 billion. Google's Sergey Brin landed in the 9th spot, at $52.4 billion, and Michael Bloomberg rounded off the top 10, with an estimated fortune of $51.8 billion.

The net worth of the average person on the Forbes 400 list increased by $600 million during the past year, Forbes noted.

Bucking the rich-get richer trend, however, is President Donald Mr. Trump, who fell to No. 259 on the Forbes 400 this year. The news outlet estimated Mr. Trump's net worth at $3.1 billion — about the same amount as a year ago but down significantly from an estimated $4.5 billion just after he launched his White House bid in 2015, when he was ranked No. 121 on the Forbes list.

Forbes cited weakening global real estate markets for some of the drop in its wealth estimate for Mr. Trump. It also blamed some of the president's political controversies since his election for dimming the luster from the Trump brand name, especially his Trump Organization's licensing opportunities in the real estate and luxury goods fields.

Still wealthier than Ted Turner or Oprah Winfrey, the president's stalled fortune as calculated by Forbes had 27 people — including Trump critic Meg Whitman and Trump supporter Ken Langone — surpassing him on this year's list.

The biggest loser last year on the Forbes list: George Soros, whose estimated net worth plunged to $8.3 billion from $23 billion, which Forbes said came as the philanthropist shifted $18 billion of his fortune to his charitable Open Society Foundations. 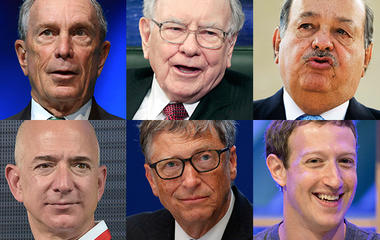 Judge threatens to stop Carnival ships from docking In U.S.