Dairy farmers are hopeful that the new U.S. trade deal with Mexico and Canada may help alleviate some of the pain they've experienced the last few years as the price of milk has cratered, threatening their livelihoods.

The overhaul of NAFTA, now dubbed USMCA for the U.S.-Mexico-Canada Agreement, aims to end discriminatory pricing and limit Canadian policies regarding its dairy powder exports. U.S. dairy farmers claim those policies have unfairly restricted their ability to compete and allowed Canada to flood world markets with its own versions.

The deal would expand U.S. access to up to 3.75 percent of the Canadian dairy market, versus 3.25 percent in the abandoned Trans-Pacific Partnership. Above that level, U.S. dairy farmers will still face Canada's punishing tariffs on dairy imports from the U.S., which can approach 300 percent.

Still, some dairy farmers are encouraged by the deal.

"This is a good step in the right direction," Morgan Peck, owner of Penokee Range Holsteins in Highbridge, Wisconsin, told CBS affiliate NBJR. Added Peck: "Every little bit helps. You know, we're happy to see that trade is getting back on track."

Peck said if the deal increases milk prices by just $1.50 per pound, that's an extra $120,000 annually for his 325-cow farm — though it still leaves room for improvement.

"We need $20 milk at a sustained pace for about two or three years," Peck said. "We aren't going to get that for a while." Farmers are currently getting around $16 per 100 pounds of milk.

The sentiment was echoed by Chequamegon Dairy Association President Peter Thewis, who said while prices may move higher in the short term, it will take time for farmers to see the deal's benefits, and longer-term issues with milk supply will require more work.

"Milk has been staying pretty flat in price right now," said Thewis. "A lot of this will depend on being able to deal with the oversupply right now in the U.S."

He added that "For long-term issues, there's less optimism looking at the trend that we see mainly with small farms, and some bigger ones, not being able to reduce our amount of supply to create a better price for the farmer so that they will continue being able to pay their bills." 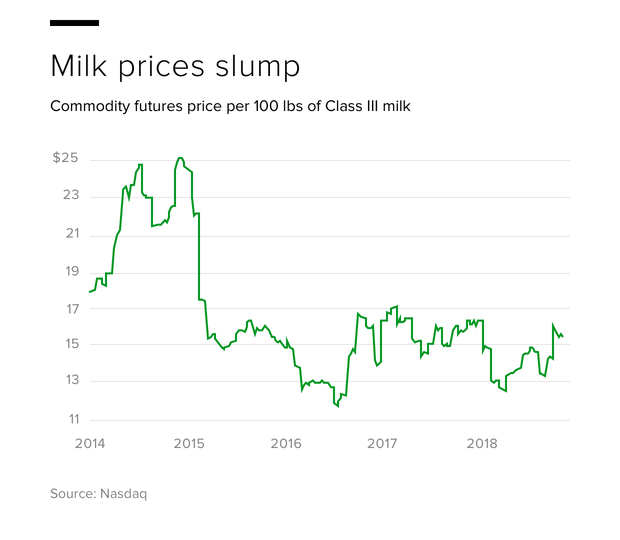 Tim Sloan retires after less than 3 years as Wells Fargo...