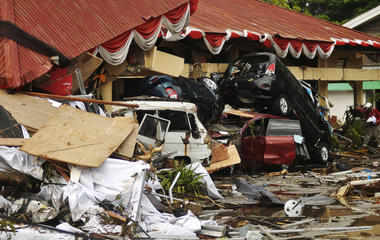 PALU, Indonesia — The rescue effort in Indonesia after a deadly 7.5 magnitude earthquake and tsunami is now increasingly a grim recovery operation. At least 1,300 people have been killed and the death toll is expected to rise.

The earthquake was so strong that in one area the ground essentially turned into quicksand swallowing everything that was on top of it. One house moved more than a mile from its foundation.

The twin disasters, first from the quake and then the 20-foot tall tsunami, continue to exact their toll on the coastal city of Palu. The head of the operation in one neighborhood showed CBS News where they mark down each victim they find. Around 8:50 in the morning they found two bodies, and then two more just 10 minutes later.

The Indonesian government is slowly bringing in supplies, but many in Palu just want to get out. Families are being loaded onto cargo planes and flown to nearby cities. CBS News spoke to one woman who had been waiting on the airport tarmac for three days with her 8-month-old baby girl. A strong aftershock hit during the interview. The worry on their faces was clear, and they know that back in town the search for family and friends continues.

One rescue worker said he alone has found 20 bodies in the rubble and it was clearly taking a toll on him. But he was happy to say he also found two people alive. 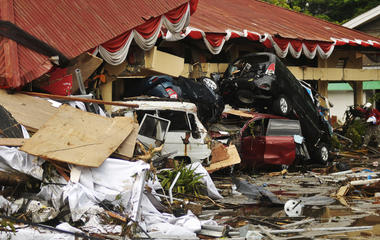