It's bad enough that bureaucratic obstacles can make a simple family reunion a logistical nightmare, but it's much worse when family members must pretend to be other people in order to avoid the penalties of an oppressive regime.

Making its U.S. premiere today at the New York Film Festival, director Ying Liang's "A Family Tour" tells a story of how politics can separate families by more than just miles, when an exiled daughter tries to reunite with her mother on the sly, by pretending to be someone else.

Thanks to the edicts of the Chinese government, Yang Shu (Gong Zhe), a filmmaker who has run afoul of censors and gone into exile in Hong Kong, can only see her mother, Chen Xiaolin (Nai An), by arranging a sly meeting on the edge of a busload of tourists visiting Taiwan (née Formosa). Pretending to be a friend of Xiaolin's family, Shu and her husband, with their three-year-old son in tow, must evade the suspicious glances and questions of other tour members and curious taxi drivers as to whether the old lady and the little boy are actually related. The fact that Xiaolin's husband was a dissident once imprisoned makes their meetings fraught with more danger.

And so Shu and Xiaolin's surreptitious reunion must be made on the periphery of a gaggle of wide-eyed tourists, Shu trailing behind their bus in a car and showing up coincidentally along a stream of historical sites and tacky diners. But the facades that are put in place to mask their true identities also get in the way of their truly reuniting as mother and daughter, even when Xiaolin passes on to Shu a recorded history of her run-in with Chinese authorities who jailed her husband.

The film is semi-autobiographical, as the director himself fled to Hong Kong following the authorities' attempts to quash his 2012 film, "When Night Falls," which had been deemed subversive. Unable to return home, Liang has lived in exile, and has here processed his sense of dislocation and search for purpose while living as a stranger in another land.

His protagonist, Shu, is herself being feted at a local film festival, celebrated for exactly the film that prompted her exile, which itself tells an autobiographical tale of a family torn by a repressive government.

On the surface, "A Family Tour" is a gentle and heartbreaking story whose narrative chronicles a torn family trying to reconnect. But it also explores the pride that allows an artist, or anyone, to resist the dictates of a government as to what is or is not subversive, while weighing the personal costs of leaving behind those you love in order to do the thing you love.

The carefully modulated performances also show the difficulty of revealing too much in such delicate situations, lest an overheard remark or a too-familiar hug raise an eyebrow, and bring consequences too painful to contemplate.

The film will screen today and tomorrow at the New York Film Festival. A theatrical release date has not yet been announced. In Mandarin, Taiwanese and Cantonese with English subtitles. 107 minutes. The film is not rated.

To watch a trailer for "A Family Tour" click on the video player below. 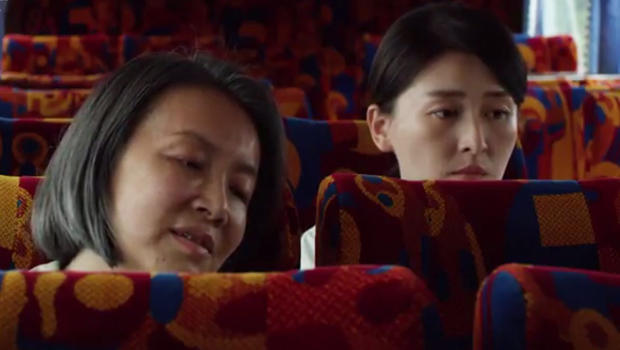