President Trump made the case to supporters in Johnson City, Tennessee, Monday night that they need to turn out in November in order to protect his administration's accomplishments since the 2016 presidential election. And if they don't, he warned, Democrats will push their agenda of open borders and higher taxes.

"They're trying to take what we did in '16. … It was the greatest election victory in the history of our country," Mr. Trump said, adding that Democrats want to "burn" down everything Republicans have built.

The president mentioned the Democratic candidate for Senate, former Gov. Phil Bredesen, long before he mentioned the Republican candidate, Rep. Marsha Blackburn. The two are locked in a contentious battle for the Senate seat. Bredesen is tremendously popular in the thoroughly red state, a concern for Republicans there. Bredesen has tried to make some breaks with his party, and has said he wouldn't support Senate Minority Leader Chuck Schumer.

But Bredesen, Mr. Trump argued, wants to take away Second Amendment rights. When he finally introduced Blackburn, the president called her a "true fighter."

As he often does at such rallies, Mr. Trump reminisced about his election night win in 2016, nearly two years ago, recalling it as one of the best nights.

The rally comes as the president, at the request of the Senate Judiciary Committee, said he has directed the FBI to conduct a supplemental investigation to add to Supreme Court nominee Kavanaugh's background file. At a press conference in the White House Rose Garden Monday, Mr. Trump said he wants a "comprehensive" investigation, and the FBI should interview "anybody," within reason.

On Monday night, Mr. Trump bemoaned how the Democrats are treating Kavanaugh, lamenting that they're "trying to destroy a very fine person."

Earlier in the day, the president also announced a new trade deal reached in the 11th hour with Canada and Mexico — the United States Mexico Canada Agreement, or USMCA. It would replace the North American Free Trade Agreement, which the president has decried as one of the worst trade deals ever, and vowed to renegotiate.

Mr. Trump mentioned the new deal in passing — but did not elaborate much on keeping his campaign promise to renegotiate NAFTA.

Mr. Trump's rally in Tennessee is one of a string of pre-midterm rallies. He was in West Virginia Saturday night, and has rallies in Mississippi Tuesday and in Minnesota Thursday. 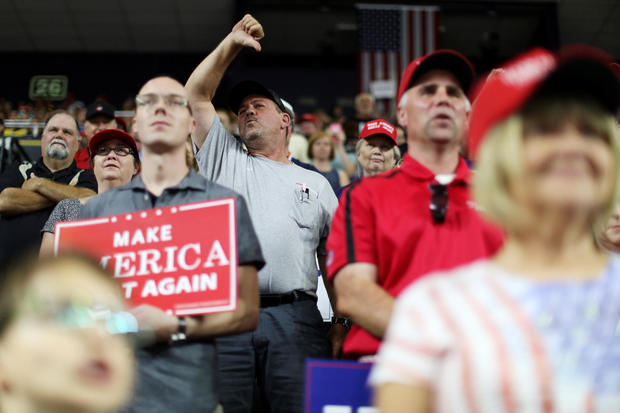