TORONTO — The U.S. and Canada officially announced they have reached a deal for Canada to stay in the North American trade pact with the United States and Mexico, according to United States Trade Representative Robert Lighthizer and Canadian Foreign Affairs Minister Chrystia Freeland. They made a joint statement late Sunday night, in which they have named it USMCA (United States-Mexico-Canada Agreement). They say USMCA will result in freer markets and fairer trade.

Officials say the agreement preserves a NAFTA dispute-resolution process that the U.S. wanted to jettison. The agreement also exempts tariffs on 2.6 million cars. On dairy the official said Canada essentially gave the U.S. the same access it offered in the Trans Pacific Partnership trade agreement that President Trump rejected.

"It's a good day for Canada," Prime Minister Justin Trudeau said as he left his office. Trudeau said he would have more to say Monday.

"It is a good night for Mexico, and for North America," Mexican Foreign Minister Luis Videgaray tweeted.

"USMCA will give our workers, farmers, ranchers, and businesses a high-standard trade agreement that will result in freer markets, fairer trade and robust economic growth in our region," the joint statement said. "It will strengthen the middle class, and create good, well-paying jobs and new opportunities for the nearly half billion people who call North America home."

The U.S. and Canada were under pressure to reach a deal by midnight Sunday, when the U.S. must make public the full text of the agreement with Mexico.

The importance of a new U.S.-Mexico-Canada trade deal cannot be underestimated: trade between the three partners affects jobs and profits in all three countries and all three wanted to get a deal done before the change of government in Mexico in two months, CBS News' Pamela Falk reports.

The original North America deal took years to negotiate and commerce between the U.S., Mexico and Canada has relied on the continuation of a trade accord, Falk added. Canada, the United States' No. 2 trading partner, was left out when the U.S. and Mexico reached an agreement last month to revamp the North American Free Trade Agreement.

So much American trade depends on the 1994 agreement that U.S. markets have been jittery about a possible collapse of negotiations — and because Mr. Trump made campaign promises to get rid of the agreement.

Because the old agreement was cemented by Congress, and was not a treaty, Mr. Trump would still have to get Congress on board and, under U.S. law, Mr. Trump will have to made the agreement public two months before he can sign it.

Current Mexican President Enrique Peña Nieto leaves office Nov. 30 and therefore, the clock was ticking to get the deal done.

Mexico's economics ministry said in a tweet earlier Sunday that the text of the pact would be delivered to the Mexican Senate Sunday night, adding that "if there is agreement with Canada, the text will be trilateral. If there is not, it will be bilateral."

U.S.-Canada talks bogged down earlier this month, and most trade analysts expected the Sept. 30 deadline to come and go without Canada being reinstated. They suspected that Canada, which had said it wasn't bound by U.S. deadlines, was delaying the talks until after provincial elections Monday in Quebec, where support for Canadian dairy tariffs runs high. 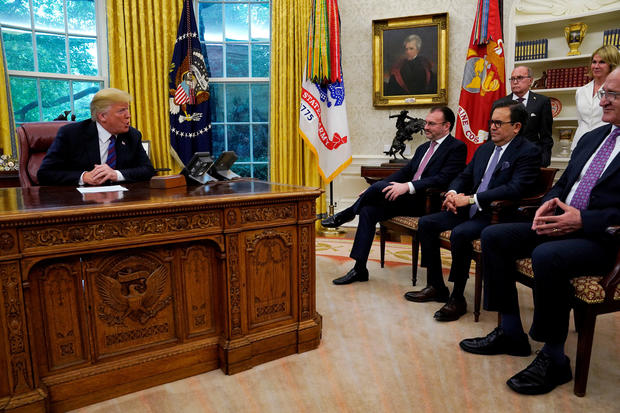