President Trump awarded the Congressional Medal of Honor to Army medic Staff Sgt. Ronald Shurer II for "conspicuous gallantry" for actions he took in 2008 in his role as Senior Medical Sergeant in support of Operation Enduring Freedom, the global war on terrorism as coined by the Bush administration.

In Afghanistan's Shok Valley in April 2008, Staff Sergeant Shurer and his team were engaged by enemy machine gun, sniper, and rocket-propelled grenade fire, according to the White House. Shurer braved enemy fire to treat numerous injured soldiers before evacuating the entire team, shielding the wounded with his own body and later rejoined the fight.

"Then-Staff Sergeant Shurer's heroic actions saved the lives of his teammates," the White House said in a statement. Shurer now serves as a member of United States Secret Service.

"We stand in awe of your father's courage," Mr. Trump told Shurer's two sons in the audience for Monday's ceremony. "I wish I was that popular," he added following loud applause for Shurer. The president said Shurer was an "inspiration for everyone in this room" and "every citizen across this great land."

The ceremony was Mr. Trump's second appearance before the press, after a lengthy press conference in the Rose Garden to tout his newly announced trade agreement with Canada and Mexico. The newser also focused on the FBI's investigation into allegations of sexual assault against Judge Brett Kavanaugh, and Mr. Trump said he was calling for a "very comprehensive" review of Kavanaugh's background, and suggested that there were Democratic senators he knew of who had drinking problems. 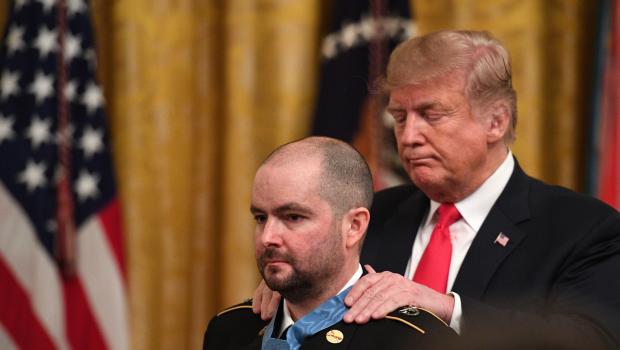 Fellow POW with McCain tells of their enduring friendship