Shares of Tesla rallied more than 15 percent Monday as investors welcomed news over the weekend that Elon Musk would continue running the show as the electric-car maker readies to release quarterly production and delivery numbers.

A settlement with the the U.S. Securities and Exchange Commission over Musk's controversial go-private tweet has the billionaire and company both paying $20 million fines — and Musk stepping down as Tesla's board chairman for at least three years. The federal regulator as part of the settlement abandoned a demand that Tesla get rid of Musk as CEO.

Tesla was up nearly 17 percent at $308.89, more than recouping losses that came as shares last Friday ended 14 percent lower. Shares last Thursday had finished at $307.52, before the SEC unveiled its enforcement action over Musk's Aug. 7 tweet stating he'd lined up funding to take Tesla private at $420 a share. While Musk eventually backed off the plan, the SEC accused Musk of misleading investors.

With Musk's future at Tesla more secure, one analyst reversed course on a downgrade of the stock it had put in play on Friday. "The settlement also has positive implications related to the cost of future capital raises," wrote Garrett Nelson at CFRA Research, who revised his view of the stock back to a neutral "hold" from Friday's "sell."

With the SEC action now in the past, investors are looking to Tesla's latest quarterly release to see whether the company can break its habit of not meeting its own ambitious production targets.

But Tesla may be turning the corner on several fronts, some analysts and Musk are indicating.

"In an internal email, Musk reportedly indicated TSLA is 'very close to profitability' which we think would be a positive catalyst as well," the analysts added. 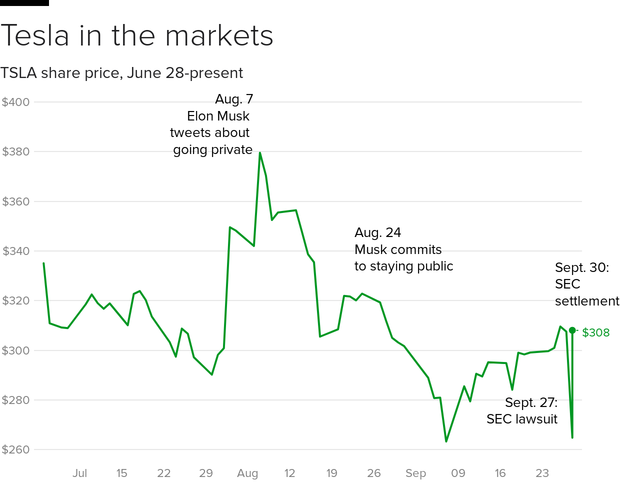