By Irina Ivanova MoneyWatch October 1, 2018, 5:12 PM Nearly 100 California companies have no women on their board of directors

California's new requirement that public companies' boardrooms include at least one woman may seem like a baby step. However, it's going to hit a staggering amount of companies.

Some will need to add more than one. The law, SB 826, requires at least one woman on boards that have four members or less; two women on boards of five people and three women on boards of six or more. The companies have three years to find these directors before the 2021 deadline hits, however.

Here are three of the largest:

The third-largest footwear maker in the U.S. has nine men on its board, of which three are company employees (including CEO Robert Greenberg.) Under CB826, Skechers would need to name at least three women to its board by 2021, the minimum requirement for boards of six or more members.

The Manhattan Beach, California-based company employed 11,800 people as of January, and had 4.1 billion in sales last year.

The San Mateo-based company, with a seven-man board, specializes in administering certain kinds of pretax benefits for large corporations, like flexible health savings accounts or transit passes. It currently counts more than 100,000 corporate clients, including nearly two-thirds of the Fortune 500, according to its website.

While it's not a household name, this business-to-business technology company had $2.3 billion in sales last year and employs 4,100 people. It counts four men on its board (with the company's CEO acting as the chair), and last named a new board member in 2006.

Here's the full list of California companies with no female directors as of Sunday:

The Russell 3000 understates the total number of public companies affected, writes Annalisa Barrett, founder and CEO of Board Governance Research. That's because the Russell 3000 includes only the 3,000 largest public companies in the U.S. and excludes so-called microcap companies — companies worth less than $300 million — that do not have any women on their boards, Barrett found in recent research.

Large companies are more likely to have female representation on their boards. However, the numbers on most company boards are nowhere near parity. Among boards of Fortune 500 companies, the most common number of female directors is two, according to research from Institutional Shareholder Services. As many companies have six women on their boards as have none.

That means that California's law would have some very large companies shifting their boards' gender makeup over the next few years. Facebook, with a board of nine but only two women (one of whom is Chief Operating Officer Sheryl Sandberg) will need to add one. So will Apple, which has two women out of eight directors. 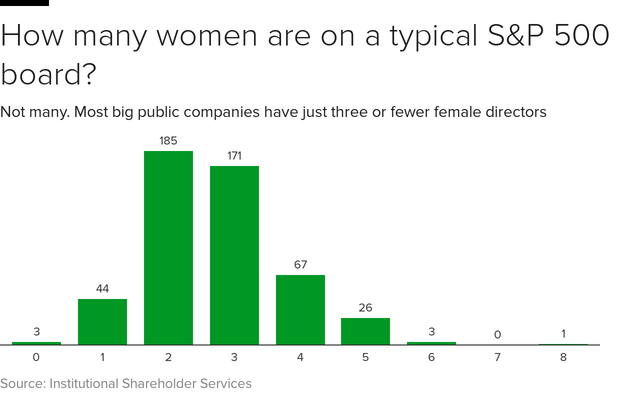