H. Lawrence Culp Jr. on Monday became the first outsider to run General Electric in its 126-year history, highlighting the need for new blood to revive the troubled conglomerate.

GE's ousting of CEO John Flannery just 14 months into his tenure caps a stunning fall from grace by an American corporate icon, a business that at the turn of the 21st century was the world's most valuable public company and whose stock was once seen as a safe bet for millions of average investors.

Culp is known as a specialist in turning companies around. He impressed Wall Street analysts and investors alike during his 14 years as chief executive of Danaher, a smaller conglomerate with businesses ranging from water treatment equipment and manufacturing to dentistry and pharmaceuticals. The executive, who also teaches at Harvard Business School, only joined the GE board in April.

"With Larry, what GE shareholders get is an outsider who will likely strip corporate back to necessary functions and tear down all the fiefdoms that prior management" built up, Scott Davis, a founding partner at Melius Research who has covered the company for more than a decade, said in a research note.

While noting that while Culp has work to do, "I wouldn't want to bet against Larry," Davis added. Wall Street, for today at least, agreed — GE shares rose more than 10 percent Monday.

GE named Culp to replace Flannery as it warned the company would fall short of recent forecasts for cash flow and profit growth, citing the weak performance of its power division. It will take a charge of about $23 billion to write down what's called "goodwill," the intangible value of the power division. Other divisions are on track, the company said in a statement today. GE will report third-quarter results later this month.

"GE remains a fundamentally strong company with great businesses and tremendous talent," Culp said in the statement, adding that management will move "with urgency" to executive its plan.

The profit disappointment and massive accounting writedown are just the latest in a long line of misses dating back to the leadership of Jeff Immelt, who led GE between 2001 and June of last year. Those included the purchase of French gas-turbine maker Alstom, which GE bought in 2015 for more than $14 billion.

GE is the world's biggest maker of natural gas-fired turbines. Immelt had bet on growth in the sector, a vision that didn't materialize soon enough for investors. His later years at the helm were also marred by a Wall Street Journal report in 2017 that GE routinely sent an empty plane to trail the executive's corporate jet when he traveled in case the aircraft broke down.

GE, founded in 1892, has lost more than $500 billion in market value since 2000, the year former longtime GE CEO Jack Welch announced his retirement, according to Bloomberg. The average tenure for a CEO at the company, which was once renowned for grooming executives to run major corporations including Boeing, Home Depot and Honeywell, was nearly 14 years prior to Flannery's swift exit.

Flannery replaced Welch successor Immelt, himself pushed out earlier than expected last summer after almost 16 years at the top. Immelt took over from Welch two days before the terrorist attacks in New York and Washington on Sept. 11, 2001.

Flannery, promoted from his most recent job as GE's health care division chief last summer, spent more than 30 years at the company. His term as chief executive got off to a rocky start. Just six months after taking over, GE was forced to pay $15 billion to make up for miscalculations at a remaining insurance divisions, catching Wall Street off guard.

That same day, Flannery said GE might take the radical step of splitting up the main company's three main businesses— aviation, health care and power — into separate entities. The company also shrank its board and pushed out a raft of directors who served under Immelt.

Flannery vowed to give GE more of a high-tech and industrial focus by zeroing in on aviation, power and renewable energy — businesses with big growth potential.

In June, Flannery made good on that promise when GE said it would spin off its health-care business and sell its interest in Baker Hughes, a massive oil services company. But investors seemed unimpressed, and the stock kept falling even as U.S. markets notched records.

Once the last original member of the Dow, GE was removed from the index this summer. Its value slipped below $100 billion even as Flannery announced a breakup. It even dumped the lighting business tied to the company's iconic founder, Thomas Edison.

What will Culp do next?

Culp, 55, ran Danaher from 2000 to 2014 in what investors and analysts view as one of the best turnarounds among multi-business industrial companies. That should be good news for GE shareholders, more than a quarter of whom traditionally own the stock directly through inheritance or as "retail investors," rather than as part of a basket of stocks through mutual funds or money managers.

Culp will likely eliminate layers of management and push executives harder to meet corporate targets. He may run the company for two to three years before returning to the board, Davis wrote.

"With Larry what GE shareholders get is an outsider who will likely strip corporate back to necessary functions and tear down all the fiefdoms that prior management (Immelt) had built up," he wrote.

Culp may also "re-baseline" the company, UBS analyst Steven Winoker, said in a note. That could include changing the dividend policy and how GE allocates capital.

GE has famously paid a dividend every year since the Great Depression. It's cut the dividend twice since the more recent financial crisis. Capital allocation can include decisions like stock buybacks, acquisitions, and research and development spending.

"Of course, GE is in a very different starting position than Danaher at the time with GE's Power, balance sheet and cash challenges," Winoker said. "However, we believe that CEO Culp will, at a minimum, re-baseline the company, drive execution and make long-term decisions that benefit the company and shareholders."

— The Associated Press contributed to this report 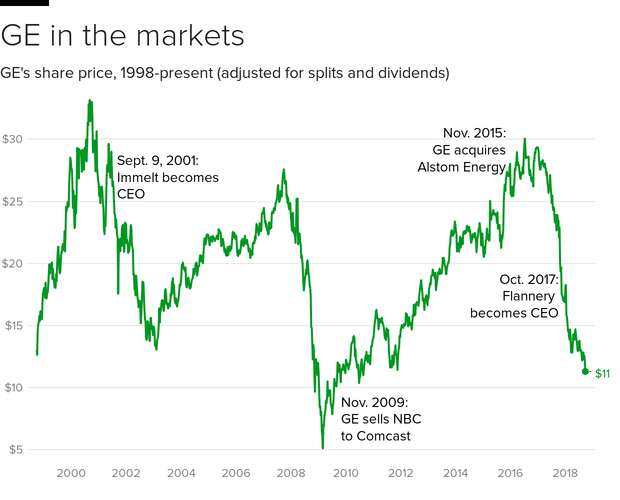 Walmart halts some ammo sales, asks customers not to openly...