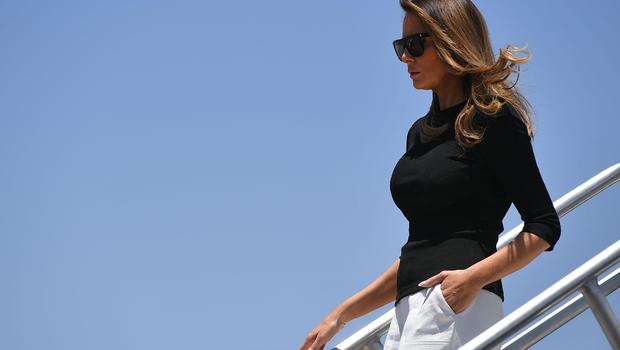 First lady Melania Trump heads for Africa on her first big solo international trip, aiming to make child well-being the focus of a five-day, four-country tour that will take her to every corner of the vast and impoverished continent.

Departing on Monday, she opens her first-ever visit to Africa on Tuesday in Ghana in the West, followed by stops in Malawi in the South, Kenya in the East and Egypt in the Northeast.

Her first extended turn on the world stage outside the shadow of President Donald Trump could still be complicated by her husband, who has spoken of the continent in impolite and even vulgar terms.

That leaves the first lady with some fence-mending duties.

"She's got some heavy lifting to do on this trip and it's a little bit unfair because that's not what a first lady's trip should be about," said Judd Devermont, the Africa program director at the Center for Strategic and International Studies. First ladies usually practice a softer form of diplomacy, showing interest in a host nation's schools, hospitals and arts programs, and avoiding thornier issues.

Joshua Meservey, a senior Africa policy analyst at the Heritage Foundation, countered by noting the "positive engagements" the president has had with some African heads of state, including President Uhuru Kenyatta of Kenya, who met with Trump at the White House in late August. Trump also met last week in New York with President Abdel-Fattah el-Sissi of Egypt.

Meservey also noted that the U.S. spends considerable amounts on public health and development initiatives in Malawi, which is among the world's least-developed countries.

"I think the U.S.-Africa relationship is much bigger than the president's comments, and it's been going on for decades and decades," he said. "Frankly, I suspect the vast majority of average Africans have not heard of any of those dust-ups. It's very much an elite preoccupation."

"Africans are, generally speaking, very gracious hosts" who will "roll out the red carpet and do their absolute best to be hospitable," Meservey said.

Days before the first lady was to board a U.S. government airplane for the flight across the Atlantic, Trump declared at the United Nations that he and his wife "love Africa."

Mrs. Trump's five days on the continent will feature a mix of visits to hospitals, schools and shelters as she focuses on the well-being of children.

Child welfare is a top issue for Mrs. Trump, the mother of a 12-year-old son. She focuses on the issue in the United States through an initiative she launched this year named "Be Best." This week's trip will mark her first extended period promoting the program and its goals abroad, separate from an event she held during a stop in London with the president in July.

A former fashion model born in Slovenia and now a naturalized U.S. citizen, the 48-year-old Mrs. Trump has traveled extensively with the president, including to Saudi Arabia, Israel, Italy, Brussels, France, Japan, South Korea and the United Kingdom. She was in Finland for the president's July summit with Russian President Vladimir Putin but did not go to Singapore for Trump's June meeting with North Korean leader Kim Jong Un.

Her only other international foray was brief: a September 2017 day trip to Toronto to join Britain's Prince Harry at a military athletic competition.

Often seen as a reluctant first lady — she did not fully move into the White House until nearly six months after Trump took office, due to her son's schooling in New York — Mrs. Trump has kept a low profile in comparison to her immediate predecessors. She was sidelined for several weeks following kidney surgery in May.

Immediate predecessors Hillary Clinton, Laura Bush and Michelle Obama all made multiple trips abroad without their spouses during their administration's two terms. Such travel has become expected of first ladies, and a similar excursion was viewed as a next step in Mrs. Trump's evolution in one of the world's most scrutinized roles.

"The first lady, when she travels to a foreign country, can carry the flag and there's a great deal she could do to engender good feeling about the United States and I hope she can do that," Myra Gutin, who studies first ladies at Rider University in New Jersey, said of Mrs. Trump.

President Trump raised ire across Africa earlier this year after his private complaint about the continent's "s—hole countries" was leaked to journalists.

He later offered a partial denial in public but privately defended his remarks, The Associated Press reported in January. He also didn't deny the comment when he was asked about it while hosting Nigerian President Muhammadu Buhari at the White House in April.

The president further roiled South Africa when he recently claimed on Twitter that the country is seizing farms and that high numbers of farmers are being killed. He pushed "send" on the tweet after watching a Fox News segment about land issues in South Africa. While killings of farmers have been taking place for more than 20 years and are widely seen as part of South Africa's high crime rate, experts say white farmers have not been the target. Nor are there signs of widespread killings, they said. 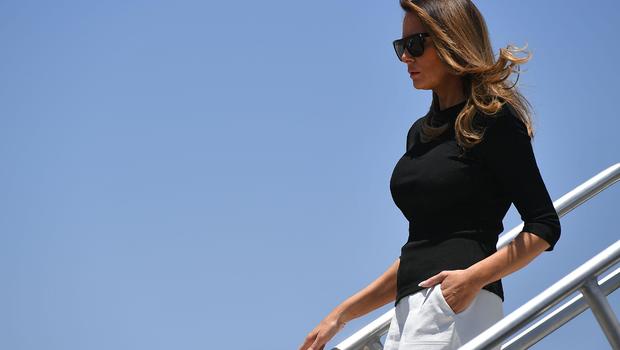 3 dead, at least 5 hurt after shooting outside graduation party

Driver working with NBC News killed in explosion in Syria