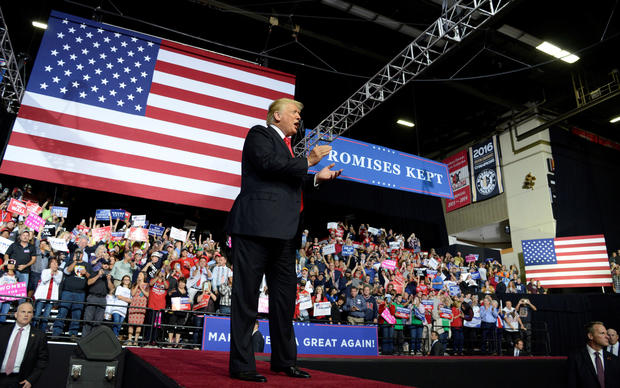 By Grace Segers CBS News September 29, 2018, 5:01 PM Trump rallies in West Virginia the day after calling for an FBI investigation into allegations against Brett Kavanaugh

Manchin is one of the Senate's most vulnerable Demoracts up for re-election this year. Republicans have a 51-49 majority in the Senate, meaning that they can only afford to lose one Republican vote to still be able to confirm Kavanaugh. Manchin voted to confirm Mr. Trump's first Supreme Court nominee, Neil Gorsuch, and Republicans believe that he may be persuaded to vote for Kavanaugh as well.

Democrats were the target of Mr. Trump's criticisms, with Mr. Trump referring to them as the "party of crime." He said Democrats would "open our nation's borders, starve our law enforcement officers."

He also said he didn't want to call them the "Democratic party" because it sounded too nice. Mr. Trump said he prefers "Democrat party." Mr. Trump suggested Sen. Dianne Feinstein of leaked sexual assault allegations against Kavanaugh, although Feinstein said on Thursday that she and her staff did not leak the allegations. Mr. Trump conceded "maybe" it didn't come from Feinstein, but "that was the worst body language I've ever seen."

Mr. Trump called out New Jersey Democratic Sen. Cory Booker, the former mayor of Newark. Claiming Booker "ran Newark into the ground," Mr. Trump said "now he wants to be president." Mr. Trump said he "dreams of these guys" being in the race.

Mr. Trump insisted a vote for Republican senate nominee Patrick Morrissey is a "vote for me."

Mr. Trump's visit to West Virginia comes after a turbulent week in Washington. The to the full Senate 11-10 on Friday, but with a condition first suggested by Sen. Jeff Flake, that the floor vote be delayed a week to allow the FBI to conduct an investigation into the allegations against Kavanaugh.

Mr. Trump instructed the FBI to open an investigation later on Friday. CBS News confirmed that the FBI was reaching out to the second woman to accuse Kavanaugh of sexual misconduct, Deborah Ramirez, on Saturday.

Mr. Trump has strongly defended Kavanaugh against all allegations, and told reporters on Friday that he had not considered withdrawing Kavanaugh's nomination. Later on Friday evening, he tweeted his support for Kavanaugh after calling for the FBI investigation. "Just started, tonight, our 7th FBI investigation of Judge Brett Kavanaugh. He will someday be recognized as a truly great Justice of The United States Supreme Court!" Mr. Trump wrote.

Manchin might feel pressured by constituents in West Virginia to approve Kavanaugh. West Virginia voted for Mr. Trump by 40 points in 2016, and every other member of the state's congressional delegation is Republican. Mr. Trump is still deeply popular in the state, and Manchin might not want to risk the ire of voters by voting against the president's Supreme Court nominee.

Mr. Trump has given several campaign rallies in recent months, including one in West Virginia in August. In each of these rallies, he tells audiences that the Democrats will never vote for his Supreme Court picks. This could be a potent argument for Republicans to turn out for Manchin's opponent, state Attorney General Patrick Morrisey.

How to watch the Trump Rally 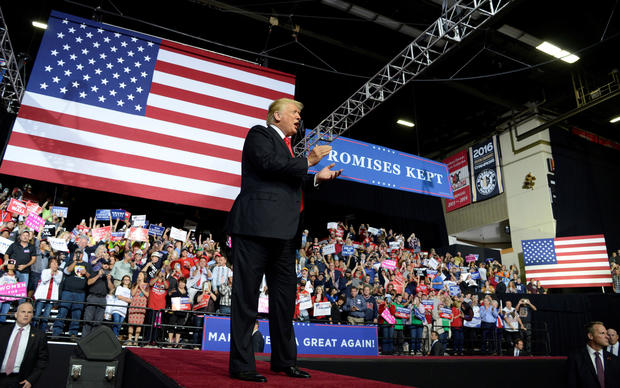 The dark web is where hackers buy the tools to subvert...