No. 27: That's where the U.S. ranks in terms of Americans' overall education, health and other attributes that can help drive economic growth, according to a study published in British medical journal The Lancet that looked at 195 countries.

In composing the ranking, researchers sought to measure what they refer to as "human capital," defined as a given population's total level of education, knowledge, training, skills, health and other dimensions that correlate with better-performing economies. Investing in those areas tends to support the economy, while neglecting them can depress growth.

The country that invests the most in human capital is Finland, concludes the University of Washington's Institute for Health Metrics and Evaluation (IHME). Other nations in the top five include Iceland, Denmark. the Netherlands and Taiwan,

By contrast, the U.S. has tumbled to its current spot, just ahead of the Czech Republic and just behind Australia, from No. 6 in 1990, according to the analysis (see chart at bottom).

Countries with greater improvements in human capital tend to have faster economic growth, the researchers said. The study drew on survey, census and other data to rank countries based on the number of years individuals can be expected to work between the ages of 20 and 64, taking into account factors such as how much schooling people get and their health.

"Our findings show the association – between investments in education and health and improved human capital and GDP – that policymakers ignore at their own peril," Dr. Christopher Murray, director of the IHME, said in a statement. "As the world economy grows increasingly dependent on digital technology, from agriculture to manufacturing to the service industry, human capital grows increasingly important for stimulating local and national economies." 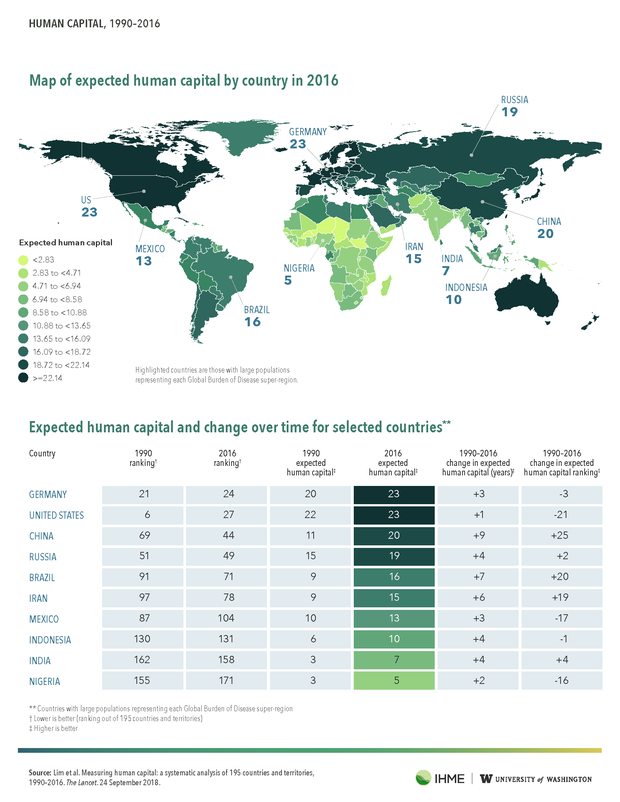 Mega Millions’ $1.6B jackpot: Where do lottery profits go?

The crumbling state of federally funded housing for the poor