In a case experts say is without precedent, the federal government is suing Tesla CEO Elon Musk over his allegedly misleading tweets — and could take down the company along with the CEO.

On Friday, shares of Tesla plunged nearly 14%, reflecting investor uncertainty over Musk's future at the company.

The Securities and Exchange Commission's lawsuit, filed Thursday, charges Musk with securities fraud over his tweets last month about taking Tesla private — a plan that turned out to be largely unfounded and seriously unfunded. The SEC is seeking to ban Musk from serving as an officer or board member at Tesla or any other company, and to pay civil penalties.

The commission did not sue Tesla, however. While the case is ongoing, Musk can continue to serve as CEO unless the board decides otherwise, SEC officials said on Thursday. And the company's board has backed Musk, issuing a statement saying they were "fully confident in Elon, his integrity, and his leadership of the company, which has resulted in the most successful U.S. auto company in over a century."

But the case could still potentially unravel Tesla, which already has been struggling with production, cash-flow, financing and talent-retention issues, even if the CEO isn't found guilty. Here's how.

The SEC suit is the first fraud case involving use of social media by the CEO of a public company, according to the Associated Press. Lawyers and analysts struggled on Friday to think of an appropriate historical analogue.

"I can't think of anything like this," said John Wilson, head of research and corporate governance at Cornerstone Capital Group. In Tesla's case, "what you're talking about is a careless disclosure by a company which then gets the company in trouble, purely on the basis of carelessness," he said. That makes it distinct from more typical securities fraud cases, which involve thought-out attempts at deceit.

It's also uncommon for an SEC fraud case to go to trial, said Adam Pritchard, a professor of law at the University of Michigan who previously worked as a senior counsel at the SEC.

"Ninety percent-plus of SEC actions that are filed are filed with a settlement in place," he said.

According to media reports, there was a settlement in place, the terms of which included Musk's relinquishing his chairman role for two years and naming two additional directors to his board. But at the last minute, Musk decided not to settle. Fox Business reported that Musk has hired a prominent lawyer who previously defended Mark Cuban against insider-trading charges.

They could still settle

The SEC's suit will now proceed like any civil case. That means, at any point in a lengthy legal discovery process and civil trial, it's possible that the parties will settle.

"Once [Musk] gets an idea of the distraction costs of having this ongoing, he may decide that a settlement is a better choice," said Pritchard.

Based on the facts the SEC presented, it's unlikely that a judge would bar Musk from serving on a public company again, said Pritchard, adding that there was little evidence that Musk was acting maliciously.

"He's not manipulating the stock price to profit. He's just a jackass. He's not a venal jackass, as far as we know," he said.

Settlements in securities fraud cases typically don't include banning a person from being a company officer, unless there is accompanying criminal activity, reported the website The Information. The SEC could be pursuing the charge to send a message to Tesla's board to get Musk under control, or as a negotiating tactic in pursuit of a settlement, Cornerstone's Wilson suggested.

"They're in the middle of a negotiation that happens to be playing out in public," he said. "I would like to believe the SEC is trying to force [Tesla] back to the table."

As it happens, there is also a criminal investigation of Tesla by the Department of Justice. But a criminal conviction requires proving that Musk had malicious intent when he tweeted, which is a relatively high bar.

"The DOJ's involvement depends on proving the Musk tweet was intended to manipulate the stock price," UBS wrote in a client note Friday. In particular, if the DOJ could prove that Musk deliberately intended to burn short-sellers who were betting on Tesla's stock price falling, the penalty would be more severe, UBS wrote.

Aside from the DOJ probe, Musk is facing several lawsuits from shareholders and short-sellers over the August tweets that wiped out billions of dollars in investors' wealth.

The multiple legal barbs underscore the precarious position of Tesla, where Musk wields an inordinate amount of power as the CEO, chairman of the board and the largest shareholder of the company. Many investors believe the company can't succeed without Musk and his vision. Then again, Musk is overseeing an auto-making operation that is six months behind schedule, has enough cash on hand to cover only about two quarters' worth of losses and has seen its chief engineer, chief accountant and head of HR exit in the space of a few months. Either way, the SEC seems to believe Tesla can't succeed without the company's board reining him in.

"I think the ideal situation is to bring in an operations person," said CFRA analyst Garrett Nelson. "But also [for Musk] to relinquish the chairman role and stay on at the company."

At least two analysts downgraded the stock on Friday. Citigroup and CFRA both cut their ratings to "sell" from "hold."

"The future is uncertain at a time when the competition is catching up with Tesla," CFRA's Garrett said.

He added: "What would Apple have become without Steve Jobs 10 or 15 years ago? That's what we see with Tesla when Elon Musk is no longer there." 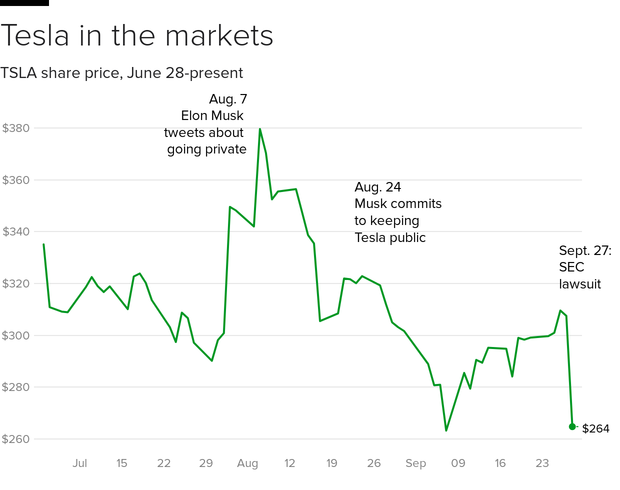 Betting on a sports scholarship for kids’ college? Don’t