The idea of running Tesla as a private company may be even more appealing today for Elon Musk than it was in early August, before he landed in hot water with investors and regulators. Since his infamous "taking Tesla private" tweet on Aug. 7 shook up investors and caught the attention of regulators, Tesla stock has taken it on the chin.

Since that tweet, the market value of Musk's electric-car company has fallen $19.6 billion, with Tesla shares sliding more than 30 percent.

That descent persisted as a lawsuit filed Thursday by the U.S. Securities and Exchange Commission casts doubt on whether Musk can continue as Tesla's CEO. Tesla shares on Friday plunged nearly 14 percent to $264.77.

Beyond seeking unspecified monetary fines, the SEC plans to request that Musk be barred from serving as an officer or director of a public company, according to the agency's suit. It alleges investors were misled by Musk's claims that he'd worked out funding to take Tesla private at a premium of $420 a share, a number that Musk later conceded was meant to be a humorous marijuana reference, according to the SEC suit.

Musk reportedly called off a deal earlier Thursday that would've had him settling fraud allegations with the SEC, according to CNBC, which cited multiple anonymous sources.

Beyond the brouhaha that followed Musk's August tweet about going private — and his about-face three weeks later — U.S. regulators were reportedly already looking into disclosure issues at Tesla, including its car-production estimates.

In a statement issued Thursday afternoon by Tesla, Musk called the SEC action unjustified, saying it left him "deeply saddened and disappointed." Tesla's board said in its own statement late Thursday that it remains confident in Musk. 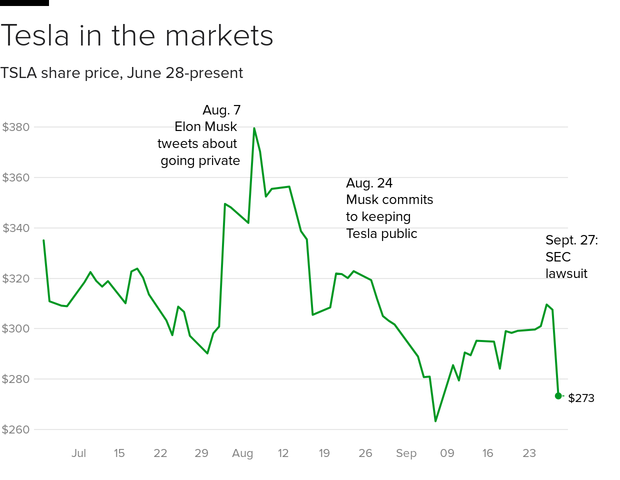 Black workers at UPS hub say they were targets of racism