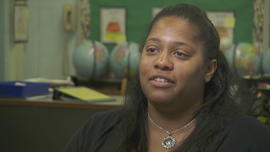 BALTIMORE — It wasn't toys or video games that got a group of fifth graders in Baltimore so excited Wednesday. It was school supplies and other necessities that many of them can't afford.

The haul is the result of a campaign known as #10featuredteachers that's gone viral on Instagram. It started a few weeks ago when singer Ed Droste asked fans to send school supplies to teachers in poor neighborhoods, many of whom pay out of pocket because their students can't afford them.

The response was overwhelming. Celebrities took up the cause, asking their fans for help. Actress Kristen Bell was among them.

"I think this is such an incredible way to get kids what they need and deserve and help the teachers that are fighting for everyone's education," Bell said.

Kristen Johnson, a fifth grade teacher at Baltimore's Sinclair Lane Elementary posted her wish list, and was stunned that Bell chose her.

"Less than 30 minutes later she messaged me back saying, 'You got it,'" Johnson said.

She was even more surprised when all the packages started arriving at the post office.

"They're like, 'Well, you'll need a moving truck,'" Johnson said.

She does not resent having to buy supplies, but wishes she could give her kids more.

"It's hard, knowing that they just don't have what other people have, so yeah," she said.

But now she has nothing but gratitude.

So are her students. 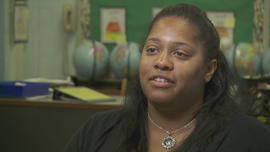