The Boy Scouts of America is recalling about 110,000 neckerchief slides due to potentially toxic levels of lead.

Worn by grade schoolers as they move through the ranks of the Cub Scouts, the slides bear one of four logos, and were sold between February and August of this year, the Scouts said Thursday in a recall notice.

The colored enamel on the slides contains levels of lead that exceed federal limits, and can be toxic and cause adverse health issues if ingested by young children, according to the U.S. Consumer Product Safety Commission.

The product retailed for about $6 and sold at Boys Scouts of America retail stores and distributors nationwide and online, the CPSC said in a release.

The impacted product bears a red wolf, a green bear, an orange lion or blue webelos (an acronym for "We'll be Loyal Scouts").

The product was made in China and distributed by the scouting organization based in Charlotte, North Carolina.

In February 2019, the Boys Scouts of America will be known as Scouts BSA, following up on a decision to let girls join. 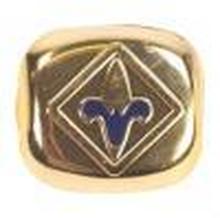 Climate change could mean big pay swings for 10% of workers