Ariana Grande is joining original "Wicked" cast members Idina Menzel and Kristin Chenoweth for a special concert on NBC to celebrate the 15th anniversary of the hit Broadway show. "Wicked" will feature Menzel and Chenoweth as they reprise their roles as onetime friends Elphaba and Glinda.

The special tribute concert is set to air on NBC at 10 p.m. ET/PT on Oct. 29, and will include performances of original songs by Menzel and Chenoweth, who debuted the roles on Broadway in 2003. "Wicked" was one of Broadway's biggest hits ever, taking less than 13 years to hit the $1 billion mark and remains the second top-grossing Broadway show, after "The Lion King," according to The Wrap. The Broadway production's current company will also appear on the special.

The reunion concert will have plenty of special guests, including Grande and Pentatonix, with more to be announced.

"'Wicked' is a blockbuster musical playing all over the world and still selling out night after night after 15 years on Broadway, and we're thrilled to be partnering with Emmy and Tony-winning producer Marc Platt and the entire 'Wicked' team to celebrate the enduring success of this show," said Doug Vaughan, Executive Vice President of Special Programs and Late Night at NBC Entertainment, in a statement. "We're especially excited to have Idina Menzel and Kristin Chenoweth reunited along with big guest stars in front of an audience — in costume hopefully — to help us celebrate the Halloween season."

The show will be taped at New York's Marquis Theater. The original "Wicked" team, including producer Marc Platt, along with Glenn Weiss and Ricky Kirshner of White Cherry Entertainment are producing the show. Weiss will also direct it. 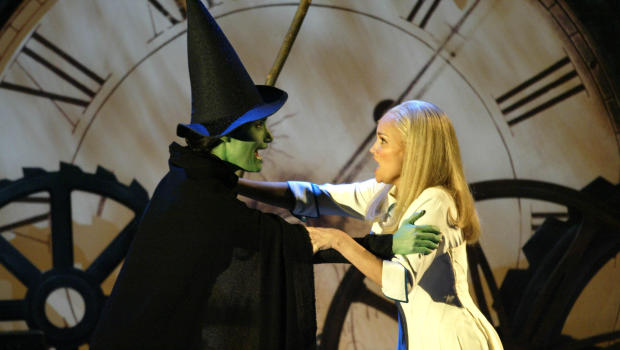