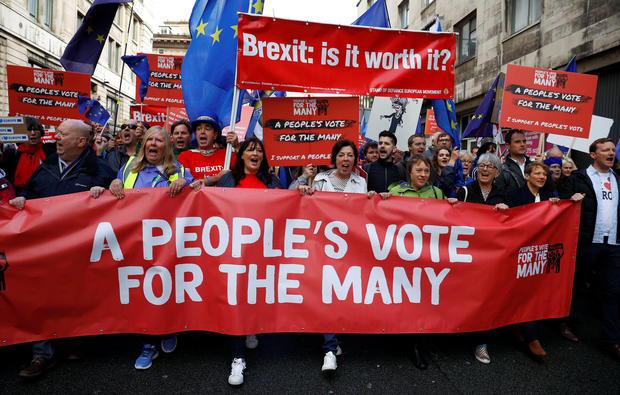 LONDON — Britain's main opposition Labour Party announced Tuesday it will reject Conservative Prime Minister Theresa May's proposed divorce deal with the European Union when it comes to a vote in Parliament and might support a new Brexit referendum.

One official said May's government was offering the country a choice between "really bad and even worse."

If Britain and the EU agree on a deal, it must be approved by individual EU nations before Britain leaves. In the U.K. that means a vote by lawmakers. The math on that vote looks ominous for May's government, however, because it lacks an overall majority.

Brexit spokesman Keir Starmer told Labour's annual conference that the party would vote against a Brexit deal along the lines that May is proposing because it does not meet "six tests" it has set, including protecting workers' rights and retaining access to European markets.

"We do not accept that the choice is between whatever the prime minister manages to cobble together and no deal … between 'really bad' and 'even worse,'" Starmer said.

Starmer said if the British Parliament rejected the deal there should be a new election on Brexit.

"If that is not possible, we must have other options," he said. "Our options must include campaigning for a public vote — and nobody is ruling out 'remain' as an option."

Starmer's suggestion that a new referendum could reverse Britain's 2016 decision to leave the EU — which was not in the advanced printed text of his speech — drew a standing ovation from many delegates in the conference hall.

Most of the party's half a million members voted in 2016 to remain in the EU, but many of its 257 lawmakers represent areas that supported Brexit. Brendan Chilton of the pro-Brexit group Labour Leave argues that the party would "hemorrhage votes" if it tried to stop Britain from leaving the 28-nation bloc.

But with Britain due to leave EU in six months, on March 29, and negotiations at an impasse, Corbyn is under intense pressure from party members to support a new public vote.

Conference delegates are expected later Tuesday to back a compromise motion leaving the option of a second Brexit referendum open but not calling for it directly.

EU leaders last week rejected the British government's blueprint for future trade ties at a fractious summit in the Austrian city of Salzburg.

May's plan seeks to keep the U.K. in the EU's vast single market for goods but not for services, in order to ensure free trade with the bloc and an open border between the U.K.'s Northern Ireland and EU member Ireland. But EU officials say that amounts to unacceptable "cherry-picking" of elements of membership in the bloc without accepting all the costs and responsibilities.

The Salzburg rebuff left May under siege from Brexit-supporting Conservatives, who want her to seek a looser relationship based on a bare-bones free trade agreement that would leave Britain free to strike new deals around the world.

Asked this week by CBS News' John Dickerson whether she felt "humiliated" by the rebuke from her fellow European leaders, May insisted she had not.

"What I felt was that I think there's a plan on the table from us. If they have issues with it, let's hear what those issues are… Look, every prime minister is faced with different challenges – domestically, globally… I've never said that this was going to be an easy process. These are tough negotiations. And, you know, as we enter the final straits of those negotiations, of course it becomes in many ways even tougher because we're closer to the end point."

For now, May is sticking by her plan. After a meeting of her divided Cabinet on Monday, May's Downing St. office said hers is "the only plan on the table … and she remains confident of securing a deal with the EU."

German Chancellor Angela Merkel warned Tuesday that time is tight. An EU summit next month is seen as a make-or-break moment for a Brexit deal.

Speaking in Berlin, Merkel said there were "six to eight weeks of very hard work in front of us in which we must take the political decisions."

"Of course, to a significant extent, this also depends on what Britain really wants – the discussion isn't so clear here," she said. 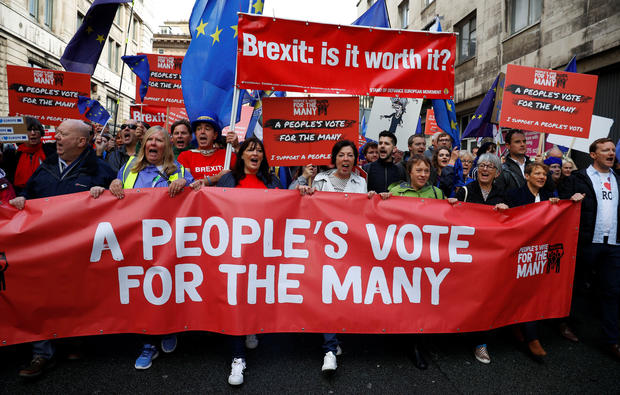