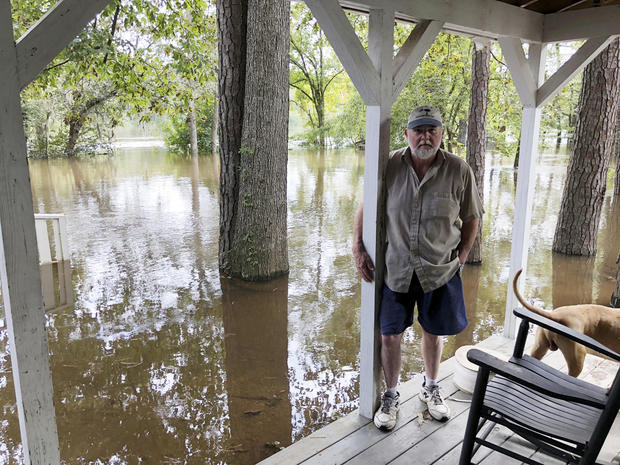 GEORGETOWN, S.C. — Eleven days ago, Lee Gantt was at a Hurricane Florence party in her neighborhood in Georgetown, where the story goes that some houses haven't flooded from the Sampit River since they were built before the American Revolution. She will spend Tuesday watching the nearby river rise from Florence's heavy rains and seeing if the luck finally runs out on her home built on Front Street in 1737.

"We thought this might be coming. We just left everything up above the floor just like from the hurricane. I'm nervous. Can't you see me shaking?" she said, stretching her arms out.

The Sampit is one of five rivers that reach the Atlantic Ocean in and near Georgetown on the South Carolina coast. And Florence, which arrived as a hurricane dumping record rainfall in North Carolina, is expected to cause record flooding downriver in Georgetown County as its final act. So much water is coming that it is backing up other rivers that aren't even flooding.

And still more is coming: The National Hurricane Center said a broad area of low pressure about 300 miles south of Cape Hatteras, North Carolina, is producing showers and thunderstorms on its north side. Forecasters said it could become a tropical depression Tuesday as it approaches the coast, and will dump rain regardless on coastal areas of North and South Carolina.

The county has recommended almost 8,000 people leave their homes — more than 10 percent of the population. Officials expect floodwaters to top several bridges, nearly cutting Georgetown County in two and leaving only one highway out during the expected crest early Thursday.

The deluge has made its way so slowly down the Lumber, Pee Dee and Waccamaw rivers that the state last week released detailed maps on where it expects flooding.

On Georgetown's historic waterfront, business have been removing their inventory and sandbagging their front doors as floodwaters from Florence head to the ocean, CBS affiliate WBTW reported.

The main business district in the city was busy — but with people leaving. Tomlinson department store sent an empty truck normally used to stock stores and employees rushed to fill it with everything. The store has never flooded, but predictions call for up to 5 feet of water by Thursday.

"The anticipation has been nerve-wracking. Though, I'm glad we had the time to do this," said district manager Kevin Plexico.

Georgetown was positioning ambulances and firetrucks in the busy, tourist section along the beaches in case the floods cut off the U.S. Highway 17 bridges as expected. On U.S. Highway 17 bridges over the Waccamaw, Pee Dee and Black rivers, Department of Transportation and National Guard crews have been installing 1,000 feet of Aqua Dams, which fill up with water to try to protect roads from flooding.

"This is an unprecedented event for South Carolina, especially in this region," said Christy Hall, Secretary of the South Carolina Department of Transportation.

Exhausted emergency officials said they have lived nothing but Florence for more than two weeks.

"The work has been done," Georgetown Mayor Brendon Barber said. "We just need to pray."

Upstream in Horry County, the floodwaters have invaded close to 1,000 homes near Conway as the Waccamaw River was slowly making its way to a crest a full 4 feet over its record level set just two years ago after Hurricane Matthew.

In North Carolina, Gov. Roy Cooper said it was time to start concentrating on recovery. "Florence is gone but the storm's devastation is still with us," Cooper said at a news conference.

About 400 roads across North Carolina remained closed due to the storm that's claimed at least 46 lives since slamming into the coast on September 14. Crews have reopened the major highways closed in the storm. Interstate 95 was reopened to all traffic Sunday night for the first time since the floods, and Cooper said Monday that a previously closed portion of Interstate 40 had reopened sooner than expected.

Power outages and the number of people in shelters also were declining. Around 5,000 people were without power, down from a peak of about 800,000, and about 2,200 people were in shelters, compared with a high of around 20,000, the governor said.

In Washington, lawmakers considered almost $1.7 billion in new money for disaster relief and recovery. And the economic research firm Moody's Analytics estimated that Florence has caused around $44 billion in damage and lost output, one of the 10 costliest U.S. hurricanes. The worst disaster, Hurricane Katrina in 2005, cost $192.2 billion in today's dollars. Last year's Hurricane Harvey cost $133.5 billion. 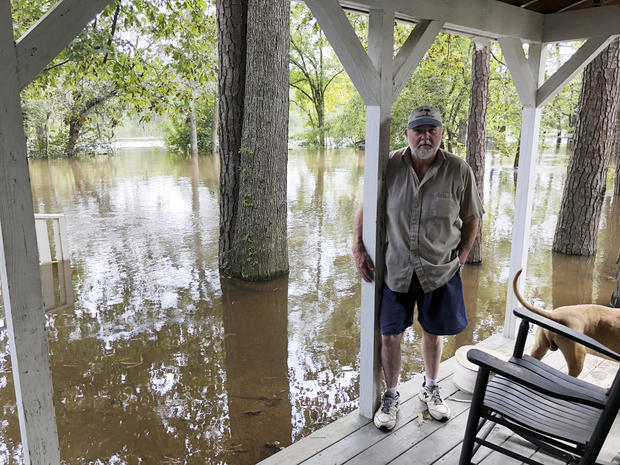