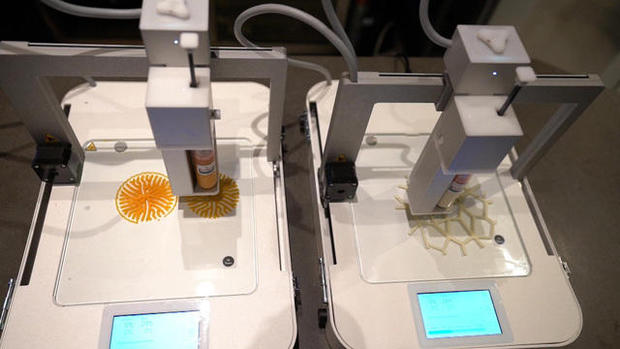 In our series, Real Food, we look at technology that may be the future of fine dining. 3-D printers are being adopted in hospitals, auto assembly lines, factories – and now, a kitchen in an upscale restaurant.

In the pastures of his parent's farm, Jan Smink, a top Dutch chef, is going back to the basics of "fresh, local ingredients" to create a new culinary future.

"We use it, but we transform it into a little bit modern version," Smink told CBS News correspondent Roxana Saberi. It's modern because he's a pioneer in 3-D printing food. 3-D printers don't actually cook meals, but they pump pureed ingredients into layer upon layer of delicate designs.

"You can make shapes what you can't make by hand," Smink said – like an avocado octopus or meat "bowls" filled with curry sauce.

Michelin-starred chefs have printed dishes before. Paco Perez at Miramar and Joel Castanyé at La Boscana in Spain both use the 3-D printer Foodini made by Natural Machines. The University of Utah Hospital now prints meals for patients with problems swallowing solid food. They also use the Foodini, making things like mashed potato castles and "cookies" made of Nutella.

But Smink is the first to give printed food a permanent place in each course on the menu at the new Restaurant Smink. So why 3-D food printing?

"Something extra for my guests, to surprise them… we want to give them an extra dimension," Smink said. It doesn't change the flavor, he said, "because what you put into the printer will come out."

But just like regular printers, sometimes what you put into these printers – in one case, cauliflower hazelnut puree and roast pumpkin – can jam. Then you have to reboot, just like computers.

Nina Hoff said while some restaurants are scared of technology in their kitchens, the printers provided by her company, byFlow, are easier to use than many chefs think.

Smink took a leap earlier this month at his new restaurant in his hometown of Wolvega, testing the technology on friends.

If dishes like these prove popular and the devices, each nearly $4,000, get cheaper, pixels to plate could improve nutrition and fight waste by transforming unappealing food into tasty works of art. Plus, it's fun.

"What is your dream dish you'd like to make with one of these printers?" Saberi asked.

"That we print the face of the guest, eatable, with a nice flavor, and make a dish of it at the end of the night," Smink said. "And if someone [doesn't] like his own face, we can print someone who is looking nice, eh?"

He said if you mix a dash of inspiration with a touch of technology, anything is possible. 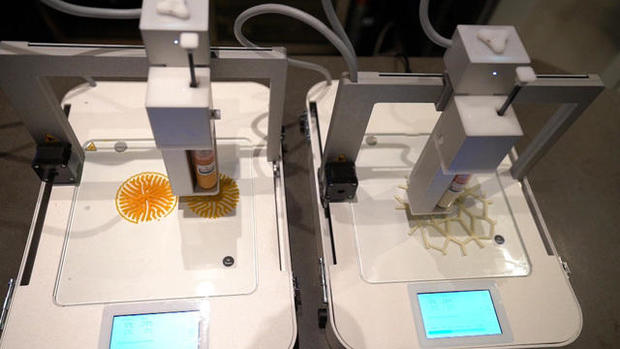