Asia Argento is tired of being portrayed as a villain, and the actress is pushing back against accusations that she is the reason why her late partner, Anthony Bourdain, took his own life. The actress opened up during an interview with Daily Mail TV about her relationship with Bourdain, the chef, author and TV host who died in June.

She said, "People say I murdered Anthony Bourdain. I cheated on him – but he cheated on me, too. It wasn't a problem for us." The actress continued, "But I understand that the world needs to find a reason. I would like to find a reason too. I don't have it. Maybe I would feel some solace in thinking there was something that happened."

Argento implied that she and Bourdain had an understanding, saying, "He was a man who traveled 265 days a year when we saw each other we took really great pleasure in each other's company. But we are not children. We are grown-ups." Days before Bourdain died, Argento had been photographed holding the hand of a male friend, enraging some fans online.

The actress also addressed the animosity toward her decision to work as a judge on "X-Factor Italy" shortly after Bourdain's death. She said that working on "X-Factor" "saved my life."

"For the hours that I was on the stage I would just listen to the music, to these artists that were putting their dreams on the stage and I would concentrate on that and not on my broken heart," she said.

Argento said that initially, after Bourdain's suicide, she felt anger toward him.

"'The anger came because this desperation has no end," she said, "And I was angry, yes, with him for abandoning me and my kids." Argento said the anger has since been replaced by a feeling of loss.

The actress said that she does feel guilty that she did not know how depressed Bourdain was when he was alive.

"What I do feel terrible about is that he had so much pain inside of him and he didn't share it," she said. "I did not see it. And for that I will feel guilty for the rest of my life."

Argento made headlines last year when she accused Harvey Weinstein of rape. Lately, the actress has been battling accusations by actor Jimmy Bennett, who says she sexually abused him when he was 17. 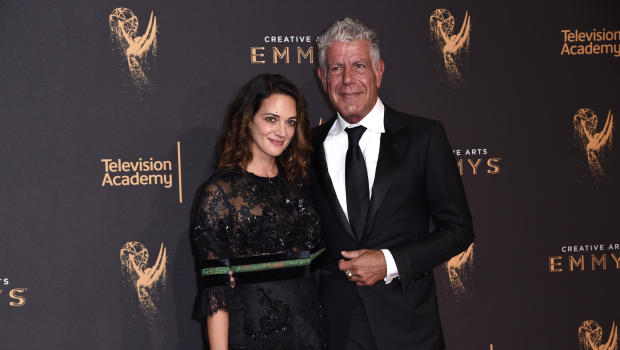 Schools dismissed early due to Beyoncé and Jay-Z concert

Trailer: “Mike Wallace Is Here,” a portrait of the legendary newsman