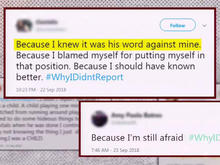 A growing number of alleged sexual assault survivors are publicly sharing their stories. The outpouring is in response to President Trump's criticism of Supreme Court Nominee Brett Kavanaugh's accuser.

Christine Blasey Ford claims Kavanaugh sexually assaulted her when they were in high school, which he denies.

The hashtag #WhyIDidntReport started trending on social media after the president questioned Blasey Ford's credibility. He tweeted, "If the attack on Dr. Ford was as bad as she says, charges would have been immediately filed."

But survivors say it's just not that easy.

"It never occurred to me really until many years later that it was rape," said author Diane Chamberlain. "I thought this was something that was entirely my fault."

Chamberlain says it took five decades to share her story of sexual assault, which occurred when she was 18 years old. She says she didn't even tell her best friend.

"I would have told her everything, so that's sort of a sign of just how ashamed I was of putting myself in that position," she told "CBS This Morning" co-host Norah O'Donnell.

Chamberlain was one of more than 720,000 – women and men – who took to Twitter this weekend using the hashtag #WhyIDidntReport.

Among them, #MeToo advocate and actress Alyssa Milano, whose tweet has been shared more than 16,000 times.

"I was sexually assaulted twice. Once when I was a teenager. I never filed a police report and it took me 30 years to tell my parents."

Many listed reasons they kept quiet, including: "Because I knew it was his word against mine." "Because I'm still afraid."

Seven out of ten victims do not report rapes and other assaults to police. The same percentage actually know their attacker. Hughes says that can make it more difficult for them to come forward.

Chamberlain hopes the current wave of people speaking up will empower the next generation. "I hope that the conversation we are having now would enable teenage girls today to know that they do need to turn to authorities, instead of my generation just living with this horror," Chamberlain said.

Since the hashtag #WhyIDidntReport started, the organization that runs the National Sexual Assault Hotline says it saw a 42 percent increase in phone calls, compared to an average Friday and Saturday. 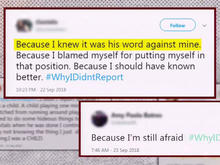