President Donald Trump in his address at a high-level meeting on the "Global Call to Action on the World Drug Problem," said that the United States is committed to "fighting the drug epidemic together" as the "scourge" of drug addiction continues to grip much of the U.S. and its closest allies around the world.

At least 124 countries have already signed up to support the global coalition to combat drugs, something Nikki Haley, U.S. Ambassador to the United Nations, said is making a difference in the worldwide fight against drugs. "The president wants to get even more countries involved to pursue action on a global scale," Haley said.

In his address, Mr. Trump explained that "illicit drugs are tied to organized crime, illegal financial flows, corruption and terrorism. It's vital for public health and national security that we fight drug addiction and stop all forms of trafficking and smuggling that provide the financial life blood for vicious trans-national cartels."

The president cited his own administration's "aggressive" efforts in securing the southern border as an effort to combat the flow of drugs.

"The call is simple," he added. "Reduce drug demand, cut off the supply of illicit drugs, expand treatment and straighten international cooperation. If we take these steps together, we can save the lives of countless people in all corners of the world."

Mr. Trump, in his own efforts to combat the U.S.' ongoing opioid epidemic, has floated penalties for "opioid companies" and tougher punishments for drug dealers, noting that some countries around the world have the "ultimate penalty."

Later, Mr. Trump will lay out his vision of the U.S. role in the world, and urge a halt to the spread of weapons of mass destruction during this week's gathering of world leaders at the U.N. General Assembly. Haley told reporters last week that Mr. Trump's focus "will be very much on the United States," its role and the relations it wants to build, and "how we can make the American people proud, and what actions we can show that really live up to that."

"He is looking forward to talking about foreign policy successes the United States has had over the past year and where we're going to go from here," she said. "He wants to talk about protecting U.S. sovereignty," and "we want to continue to build relationships" with other countries that "share those values."

The president will address the assembly's 193 member nations at the official opening on Tuesday morning of the global gabfest known as the General Debate.

Mr. Trump will then chair a Security Council meeting on Wednesday, which was expanded from focusing solely on Iran to include wider discussions on nonproliferation, including chemical weapons attacks in Syria and Britain. 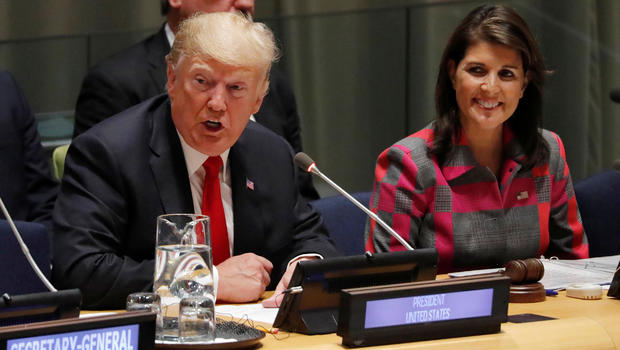