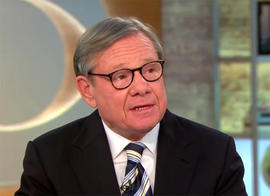 Michael Ovitz rose from working in a mailroom to become a super-agent representing some of Hollywood's biggest stars. He co-founded Creative Artists Agency, a dominating force in the talent agent business, and helped shape the careers of A-List entertainers like Steven Spielberg, Meryl Streep, Bill Murray and David Letterman.

Appearing on "CBS This Morning" Monday, he talked about his new memoir, "Who Is Michael Ovitz" (published by Portfolio), and his life as one of Hollywood's most powerful figures. After heading CAA for two decades, he went on to a tumultuous stint as president of The Walt Disney Company and other roles in the industry.

"You said it perfectly, Gayle: it was a role, I played a role," Ovitz replied. "I made a decision that the buck had to stop with me. We had 1,400 clients, there were a lot of executives in the company and somebody had to make the trains run on time. So, the decision was made to go out and to create someone who dealt with authority and was interested in getting things done. That does not always make for a popular camper."

Speaking of his new book, King said she was surprised at how candid he was. "You named names," she said. "You also talked about the mistakes you've made. You say you always wanted to make clients think they're your friends, but remember they are not your friends, they're your clients. And in the end the clients were loyal and the friends betrayed you. And you name the friends who betrayed you. But people would say you did your fair share of betraying, too."

"I think that's fair," he said. "I think in the course of doing what I did, it's impossible to please everybody all the time."

"But it's more than pleasing everybody – you did some things on both sides, though, that people could say were ruthless, that were ambitious and were just outright wrong."

Co-host Norah O'Donnell asked Ovitz to discuss his "four commandments" by which agents at CAA had to abide:

-Never lie.
-Return every call by the end of the day.
-Follow up, and don't leave people guessing.
-Never bad-mouth the competition.

"Well, we were in a business of communication," Ovitz said, "and one of the things that was prevalent in the agency business before we got into it was this concept of not telling the truth. Knowledge is power, and a lot of people thought they could have power by telling things that weren't true – flattery, getting into conversations with people and saying things that you knew weren't true."

"Barbara Streisand called you and started complaining about not getting equal pay, that they weren't treating women fairly," O'Donnell said. "What did you say to her?"

"I actually thought she was right, which was interesting," he said, "But I probably had run out of patience by that time!"

He also explained that Streisand was no longer an attraction for a young audience: "I had a 15-year-old son at the time, and she wasn't on the list of who they were talking about. That did not detract from her talent; she was just moving to a different demographic."

"Yeah, my mother moved to that 'other demographic,' and they fired her!" co-host John Dickerson said.

He asked Ovitz, "When you were being your most ruthless, was that you doing it, or the role, and how did you know who was which?"

"Well, you get confused," Ovitz said. "Because you start to play that role and you become that person. And I was in a position where we were in a service business, and our assets walked out the door every night. And those assets were the agents that worked in the company and the clients that we all represented. In order to be able to keep the peace and keep the trains running on time, it was very important to create an invincible chain with no weak link in it. And that no weak link turned out to be the weak link."

"What kind of toll does that take?"

The book also covers Ovitz's time as the number two executive at Disney, under longtime friend Michael Eisner. It was a friendship that soon ended up as something else when, he said, Eisner betrayed him.

"Loved him like a brother, loved his family. I was shocked when I walked into his house to meet the two other senior executives that were supposed to be reporting to me and they said they wouldn't report to me, and he didn't back me up," Ovitz said.

His tenure at Disney would be short-lived. 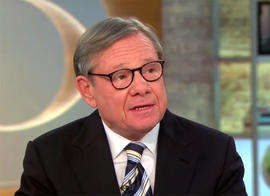