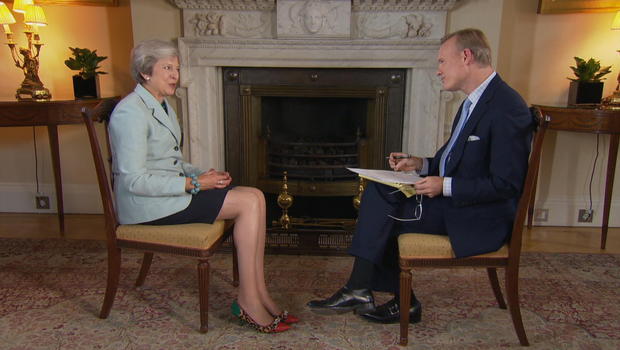 President Trump and British Prime Minister Theresa May will be among more than 130 world leaders expected for meetings at the United Nations General Assembly this week. May will raise important global issues, including the Iran nuclear deal and the use of chemical weapons by Russia. Britain accuses Russia of poisoning four people in Salisbury, England.

"CBS This Morning" co-host John Dickerson visited the prime minister's official residence at 10 Downing Street in London for her only interview ahead of the U.N. General Assembly. May told Dickerson that she trusts Mr. Trump and believes Iran is holding up its end of the nuclear deal.

JOHN DICKERSON: When you talk to President Trump, does he listen?

THERESA MAY: Yes, we have very good discussions. And these are, I mean, the point of the special relationship between the United Kingdom and the United States in a sense is that we can have those frank and open discussions. And when we disagree, we will – we can say to each other we disagree and why we disagree. But at the same time, we cooperate on so much else, which is of crucial importance to us. Clearly, obviously security and defense being key to that.

DICKERSON: Is there an instance in which you think he listened to you and his behavior changed?

MAY: Well, I think that we have – we have a number of conversations about these issues. And I think we have – we've been talking about issues around trade, about the importance of NATO. … I think I was the first leader to come after his inauguration. We were able to talk openly about the value of NATO. And he reconfirmed the American commitment to NATO.

DICKERSON: When he tells you something, do you trust him?

MAY: Of course I listen to what the American president tells me. We have—

DICKERSON: But do you trust him?

MAY: Well, yes. I mean, we work together. We have a special relationship. This is two people reflecting as leaders of their two countries – the relationship that those two countries have and have built up over a number of years. And as we work together – let me give you a very good example. You know, I spoke to President Trump after the Salisbury attack took place. He said he would expel Russian intelligence officers. He did it.

DICKERSON: You also, it was reported, asked him to raise it with Vladimir Putin in Helsinki. He didn't. What did you make of that?

MAY: Well, there's – he raised a number of issues were raised in that discussion.

DICKERSON: Was it a missed opportunity?

MAY: But, look… How can – I think Vladimir Putin is in no doubt about the view that we have about what happened on the streets of Salisbury.

DICKERSON: I just wonder whether it could have been amplified by the American president saying, given the special relationship, which was built around common defense, of course, in Churchill's original speech, whether that could have really sent the message home in a personal meeting.

DICKERSON: How high up in the Russian government…do you think? You've said the G.R.U. was involved in this poisoning. Does it go all the way up to Vladimir Putin?

DICKERSON: Could be Putin.

MAY: We believe it was taken at a senior level.

DICKERSON: Who's responsible for the state of the relationship between the international community and Russia?

MAY: It's Russian actions that is leading to the international community's response.

DICKERSON: The reason I say that is the president – President Trump said, "We're both to blame," when asked that same question.

MAY: I think what I am reacting to as a U.K. prime minister, and I think what the international community reacted to, including the United States after Salisbury, was action that Russia had taken on the streets of the U.K.

DICKERSON: Has Iran been holding up its end of the bargain of the 2015 deal?

MAY: Well, this is the question of that deal of course is – an area where I do have a difference of opinion with President Trump because we believe the JCPOA should stay in…place. And others involved in putting that deal together believe that it should stay in place. We do agree with the United States that there are other aspects of Iran's behavior that we need to be dealing with, too. So looking at the issue of ballistic missiles. Looking at the way in which Iran is acting in the region to destabilize the region. We need to address those issues, too. But we also want to ensure that we have a nuclear deal in place that prevents them from – of getting a nuclear weapon.

DICKERSON: But by your assessment, Iran is keeping up its end of the bargain?

MAY: From what we see, we believe that it is doing that.

DICKERSON: How can you make progress on something like chemical weapons when deals can be just walked away from like the JCPOA?

MAY: Well, the important thing about the JCPOA, about that nuclear deal, is that it is still in place. Yes, the United States has taken a particular view on how to deal with this issue. That's a view which we disagree with. We take a different view. But that deal is still in place.

Tune into "CBS This Morning" at 8 a.m. to see Part 2 of this conversation. 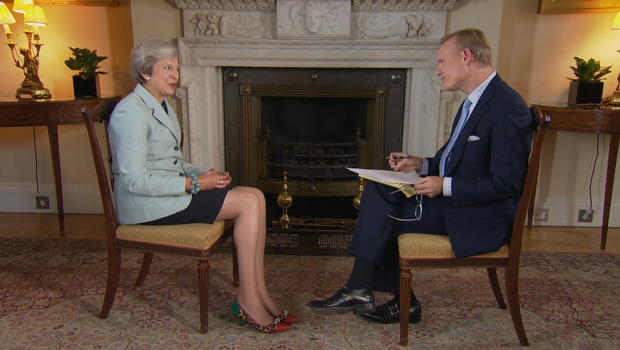