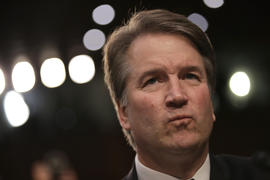 Another woman has accused Supreme Court nominee Brett Kavanaugh of sexual misconduct, according to a new report in The New Yorker. According to The New Yorker, 53-year-old Deborah Ramirez alleges Kavanaugh exposed himself to her at a party when they were both students at Yale University in the 1980s.

The newest allegation published Sunday night comes as another Kavanaugh accuser, Christine Blasey Ford, is expected to testify Thursday before the Senate Judiciary Committee. The newest allegation also comes as attorney Michael Avenatti tells CBS News' Paula Reid he is representing yet another woman who knew Kavanaugh in high school — although it's unclear what that woman's claim might be. Avenatti tweeted Sunday that he is representing a woman with "credible information regarding Judge Kavanaugh and Mark Judge," a friend of Kavanaugh's.

In The New Yorker story by Ronan Farrow and Jane Mayer, Ramirez claims the incident happened during a drinking game at a college party. Ramirez said that while she was drunk, a male student pointed a plastic penis at her. At that point, Kavanaugh allegedly put his penis in front of her face, and she accidentally touched it as she pushed him away.

"I wasn't going to touch a penis until I was married," she told The New Yorker. "I was embarrassed and ashamed and humiliated."

She said she remembers Kavanaugh laughing and pulling up his pants.

"Somebody yelled down the hall, 'Brett Kavanaugh just put his penis in Debbie's face,'" she said. "It was his full name. I don't think it was just 'Brett.' And I remember hearing and being mortified that this was out there."

The White House and Kavanaugh have denied the allegation as a "smear," and the White House is standing by the president's nominee.

"This alleged event from 35 years ago did not happen," Kavanaugh said in a statement provided by the White House. "The people who knew me then know that this did not happen, and have said so. This is a smear, plain and simple. I look forward to testifying on Thursday about the truth, and defending my good name — and the reputation for character and integrity I have spent a lifetime building — against these last-minute allegations."

"This 35-year-old, uncorroborated claim is the latest in a coordinated smear campaign by the Democrats designed to tear down a good man," Kupec said. "This claim is denied by all who were said to be present and is wholly inconsistent with what many women and men who knew Judge Kavanaugh at the time in college say. The White House stands firmly behind Judge Kavanaugh."

Another person who was at the party denied memory of the party. And several classmates disputed Ramirez's account.

A classmate of Ramirez, who declined to be named in the piece, claimed another student told him about the incident within two days of the party, saying he is "100 percent sure" he was told back then that Kavanaugh was the student who allegedly exposed himself to Ramirez.

The New Yorker says Ramirez was initially reluctant to characterize Kavanaugh's alleged role, but she became confident enough in her story after six days of recalling her memories and consulting her attorney.

The allegation comes at a crucial time in Kavanaugh's confirmation process, with days until Ford is set to lay out her own allegation that Kavanaugh assaulted her when they were both in high school.

One Republican senator, declining to be identified, called the developments published in The New Yorker "bizarre" and a series of "ugly allegations."

"I don't know who or what to believe any more," the senator said. "That doesn't seem like Brett Kavanaugh. But I didn't know him then. If true, this accusation would obviously be a problem."

Ed O'Keefe contributed to this report. 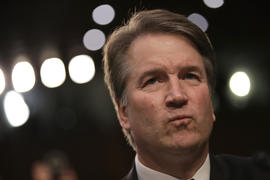