NEW YORK — Paul Simon wraps up his farewell concert tour Saturday night at a park in Queens, a bicycle ride across the borough from where he grew up. The 76-year-old singer picked Flushing Meadows Corona Park to say goodbye, an outdoor show on the first night of autumn.

The setlist at recent stops has ranged from his first 1960s hit with ex-partner Art Garfunkel, "The Sound of Silence," to selections from a disc released weeks ago.

Simon isn't retiring, and hasn't ruled out occasional future performances. But he's said this is his last time out on the road, and he isn't alone among his peers; Elton John and Kiss are also doing goodbye swings.

A staple of the folk-rock scene with Garfunkel, Simon explored music from around the world as a solo artist, most notably "Graceland" and its African influences. His recent work has been his most musically challenging, and in his new disc he revisits overlooked songs from the past four decades. He's a Rock and Roll Hall of Fame member for both stages of his career.

The return to New York raised memories of Simon's two iconic shows in Manhattan's Central Park, in 1981 with Garfunkel and in 1991 on his own. He played two nights in Madison Square Garden earlier this week.

Thousands flocked to his last show of his last tour in his own hometown, CBS New York reports. The concert called "Homeward Bound: The Farewell Performance" was held not far from where Simon grew up in Kew Gardens Hills.

"I grew up in Queens and I'm here to see one of the Queens heroes, Paul Simon," one fan said.

"I'm so excited. I've been here with my dad. I'm a little bit from the younger generation, and he's from the time of Paul Simon, but we're having a really good time," Christina Millie told CBS New York.

"We're really excited. We're big Paul Simon fans, and so were our parents, so it's extra special for us," said Angela Tucciarone.

His fans aren't just here in the states, but around the globe.

"I came from Dublin and she came from Bermuda," one woman said.

"For me, it's a one-in-a-lifetime time thing," said another fan.

Mayor Bill de Blasio even joined the singer on stage.

An often dour performer, Simon has been animated and talkative during the final shows. He seems eager for the freedom that awaits him, said Robert Hilburn, who wrote the biography "Paul Simon: A Life" that was released this spring.

"The thing that strikes me is that he's been happy, relieved," Hilburn said. "There's a burden off of him."

During an earlier show in Portland, Oregon, Simon playfully "penalized" himself for flubbing the lyrics to one song by singing an old Simon & Garfunkel hit he confessed to hating: "The 59th Street Bridge Song (Feelin' Groovy)." 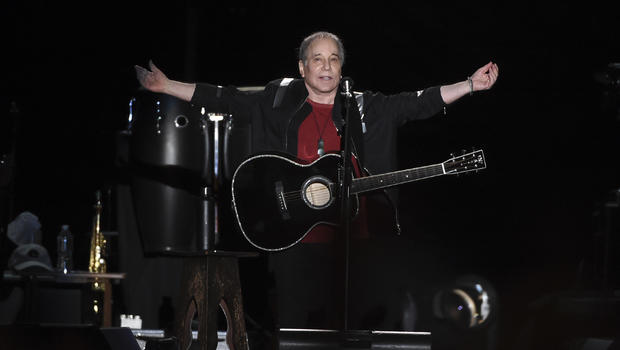