Oscar-winning filmmaker Michael Moore's stock in trade – political documentaries that expertly blend video clips, old newsreels and educational films with humor and needling stunts played upon politicians and corporate overlords – may be familiar by now, but as the situation in the world becomes more dizzyingly chaotic, it's a form of comfort food. Yes, the audience can tell themselves, someone gets it.

In his latest, the director of "Roger & Me" and "Bowling for Columbine" has created a sequel of sorts to his 2004 film, "Fahrenheit 9/11," titled "Fahrenheit 11/9" (after the date that Donald Trump was declared winner of the 2016 presidential election). It is one of Moore's strongest films of late, not least because his most glaring target is so potent: President Trump, and how he got to where he is.

Surprisingly, there is less Trump fodder here than audiences might expect from such an outspoken critic of the president. Moore's experience with the man, back when he was just a bankrupt real estate tycoon and future reality TV star, dates to a shared appearance on Roseanne Barr's talk show in 1998, where Moore was gently asked by Barr's producers to hold his fire lest Trump walk off the stage in a fit of pique. Moore bit his tongue, and regretted it later, feeling he'd been played.

He doesn't hold back now. And yes, he goes there – equating Trump's handling of the media and his repressive policies in office to Hitler's. Moore explains how it is but a short walk from demonizing entire classes of people, denigrating law enforcement and mocking the free press as liars, to fascism, and Moore blends Nazi propaganda footage with scenes from Trump rallies and white supremacist marches today to make the point that the candidate's (and now president's) rhetoric and actions have a predictable end result: divisiveness, violence, and despair in the institutions of democracy. Moore also juxtaposes audio of a Guatemalan child crying after being separated from her parent at the U.S. border with footage of Nazi guards separating Jewish families. Need more? Moore even puts Trump's own words into Hitler's mouth.

Trump's personal excesses aren't ignored, either; there are more pictures of him ogling his daughter, Ivanka, then anyone would ever want to see.

But the president's supporters may be mollified to note that the filmmaker spares no one. A considerable portion of "Fahrenheit 11/9" is devoted not to the disruptor who took down the Republican Party and remade it in his image, but to the Democratic Party establishment who sat idly by. In fact, party elites who block more progressive voices and candidates and preach "compromise" with the GOP are painted by Moore as even bigger threats to democracy, by stifling participation and prompting citizens to walk away from exercising their power to vote. The superdelegates that quashed Bernie Sanders' backers at the Democratic National Convention are just one example.

Hillary Clinton gets some flack, though Moore helpfully annotates how so many male political and media figures who questioned Hillary's bona fides because of her gender had some baggage of their own with regards to dealings with the opposite sex. And two-term Democratic President Bill Clinton is painted as a DINO, pushing initiatives that wouldn't have been out of place on a Republican Party platform.

Even President Barack Obama is shown paying (moistened) lip service to the citizens of Flint, Michigan, when he fails to bring the cavalry to correct the city's miserable water problems. The result: broken hearts among activists who feel the moral center of the country had abandoned them.

The continuing disaster in Flint is actually the film's biggest story thread. Here Moore zeroes in on Republican Gov. Rick Snyder, a former executive who campaigned on running Michigan like a business, and his efforts to alter the source of Flint's water supply from the pristine Lake Huron to the contaminated Flint River, with calamitous results. Residents were left at the mercy of overseers who were not responsible to the people (after Snyder signed an Emergency Manager Law – even though there was no emergency – thereby removing democratically-elected officials from Flint and several other cities). Their actions led to irreversible, even fatal health effects.

Synder was later found to have borne (in the words of a University of Michigan School of Public Health report) "significant legal responsibility" for covering up the water problem, leaving parents unawares of the dangers facing their children (all of whom had consumed lead-laced water) and of a threat posed by an outbreak of Legionnaire's Disease.

Moore interviews pediatricians, activists and local officials who decry the lack of power over the government's actions, and it is here where Moore employs his puckish stunts, such as attempting a citizen's arrest of the governor.

But while it's the most painful section to watch, the disaster in Flint also sets up Moore's ultimate thesis for the film, which is that the exercise of power by the people is a potent, if barely-tapped, resource that can actually overcome the nefarious efforts of special interests, particularly conservative politicians fighting against the general public's more liberal inclinations.

Moore meets some of the "extraordinary ordinary people," who, since President Trump took office, have decided to run for office themselves, taking down party stalwarts and challenging the status quo. He also looks at a rebirth within the nation's battered labor movement, including the West Virginia teachers' strike, which sparked similar strikes by teachers across the country after they – amazingly – won their demands; and at how the teenagers of Stoneman Douglas High School in Parkland, Florida, showed their elders what an anti-gun violence movement can achieve. A bunch of kids!

"Fahrenheit 11/9" is terrifying in showing just how fragile and elusive the idea of democracy is, after a couple hundred years of trying to get it right. It also reminds people who are ostracized, cut off from the American Dream and living in hope that they will be rescued by a political leader, of any stripe, that democracy's best hope is themselves, working together for the interest of all. And it's right there in plain sight, in our nation's motto: E pluribus unum … out of many, one.

"Fahrenheit 11/9" (distributed by Briarcliff Entertainment) is now playing. 126 mins. The film is rated R, for language (because today's politics lead people to say "What the ****?" a lot).

To watch a trailer for "Fahrenheit 11/9" click on the video player below. 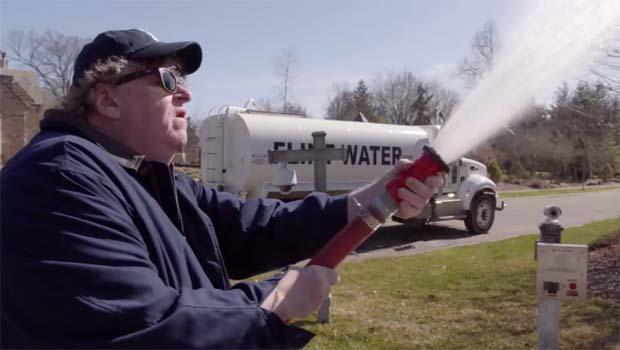 How this presidential transition compares to past transfers of power

Gottlieb says vaccine will likely be widely available by middle of...