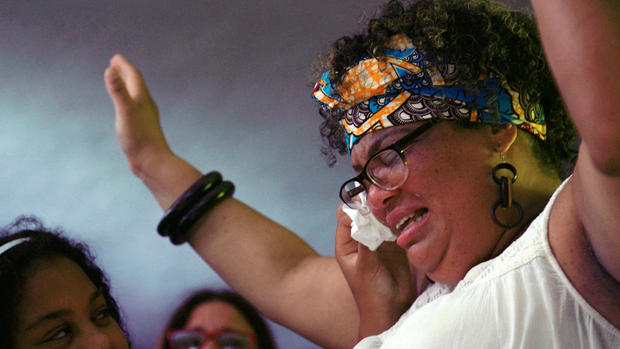 In the year since Hurricane Maria struck Puerto Rico, the island has suffered many losses: homes and livelihoods, electricity and clean water, and tragically, nearly 3,000 lives. But even as the rebuilding effort goes on, another type of loss is taking a growing toll: the loss of some 200,000 residents who've left the island in search of a better life elsewhere. Without these business owners, skilled workers, doctors, teachers, church members, parents and children, Puerto Rico's future looks even more precarious.

Damarys Perales and her 10-year-old daughter Alahia are reluctantly joining the exodus.

"It hurts me to leave like this," Damarys told CBS News correspondent David Begnaud, who's been covering the impact since the storm hit. But she adds, "I need the change. We need the change."

When the hurricane slammed ashore on September 20, 2017, Damarys and Alahia had to flee in the middle of the night with little more than the clothes on their backs. A mudslide descended on the house where they'd lived for the past four years. They've been staying with Damarys's mother ever since.

"We were without light for nine months," Damarys said. The power didn't come back on until June 16 — the day of her daughter's birthday.

Puerto Rico Governor Ricardo Rosselló says he knows how difficult things have been for families like Damarys's.

"It's been a hard recovery process. The level of devastation and the magnitude of Maria is something that was really hard to plan for," Rosselló said. He lays some of the blame on the federal bureaucracy, telling CBS News, "Things that take seven days on a normal transaction from FEMA take over 140 days."

While there are some bright spots of hope and progress amid the shuttered businesses and abandoned homes that dot the island, government agencies at every level are still struggling — not just to take care of the living, but also to tend to the dead. The forensics center and morgue in San Juan is overwhelmed, with a backlog of bodies stored in refrigerated 18-wheelers.

The head of forensic sciences, Monica Melendez, said her main focus is trying to retain enough staff to work through the burgeoning caseload. The day Begnaud visited, there were 330 bodies on site. Since the hurricane, Melendez said they've been receiving about 25 more bodies per week than they handled before — an additional 100 cases per month.

Those figures reflect an uptick in deaths that continued long after the hurricane winds died down. An independent analysis commissioned by the governor of Puerto Rico and conducted by researchers at George Washington University's Milken Institute School of Public Health determined that about 2,975 people died as a result of Hurricane Maria in Puerto Rico between September 2017 and February 2018.

By law, the pathologists at this morgue can only work 325 cases per year. And despite the great need, the center keeps losing staff to the U.S. mainland.

Puerto Rico's problems didn't start with the hurricane. The island, a U.S. territory, has been in the throes of an economic crisis since 2004, and its financial troubles began long before that.

Its population declined from a peak of 3.8 million to about 3.5 million, and since Maria hit, that migration has surged into a full-blown exodus, with an estimated 200,000 more residents picking up and leaving for the U.S. mainland. Since Puerto Rico is a U.S. commonwealth, and its people American citizens, they are free to travel to the states without restrictions.

The exodus is draining the island of the resource most vital to getting back on its feet: its people. Without them, some fear the island will never fully recover.

Damarys Perales worked as an accountant in Puerto Rico's health department, which provides health care services for nearly 1.5 million people. A year after the hurricane, she can no longer afford to wait for recovery efforts to pay off.

"So the little savings I have and what I could sell from the things I had is what I'm taking with us to be able to start over in Florida," she said. "We have to take advantage of the opportunities in the moment."

One of the factors driving people to leave is the lack of bare-bones necessities like electricity. The storm downed 80 percent of the island's power lines, leading to the largest blackout in American history and the second-largest worldwide.

Yanira Belén Cruz started a Twitter campaign calling out the government for its slow response in the hard-hit community of Utuado, where her elderly grandparents live. Month after month they waited for the electricity to come back on, unable even to power their electric wheelchair. A generator kept a single light bulb illuminated overhead and let them run a fan, the freezer and a TV for a few hours a day.

Puerto Rico Electric Power Authority said the last of its customers were finally reconnected in mid-August 2018, 11 months after the storm. The government's utility agency is bankrupt and has been plagued by scandal and insufficient resources.

It's not just government agencies struggling to stay afloat. As of 2015, Puerto Rico was losing one doctor every day — increasing wait times and potentially putting patients with special needs at even greater risk.

Damarys says she looks forward to having better access to health benefits for herself and her daughter on the mainland. But it means leaving behind her father, who has Alzheimer's disease.

"I try to spend the most time with him… because if something happens to him, it will be hard for me to come to Puerto Rico, to be with the family in that moment," she said. "But, before that, he told me, if your blessings are in the United States, go. Don't stay here for me."

They also must say goodbye to Alahia's school. One of the most obvious signs of the exodus can be seen in the education system: 254 schools shuttered, some damaged by the storm, others closed because children have left. Since the storm, 42,000 kids have disappeared from the rolls; most are believed to have moved to the mainland and are now enrolled there instead.

"I like my school a lot. I was there since first grade. I had a lot of friends," Alahia said. But she said teachers as well as students are walking away.

"She's very smart," said Damarys, who believes a good education for Alahia will be the "biggest benefit" of their move. "Florida is a good place to start. … It's better because it's bilingual. We'll practice and learn English better."

"We have gotten stronger"

So far, half of the Puerto Ricans using their American passports to move stateside are under 24 years old — a demographic that is the lifeblood of any labor force. But some young professionals and artists believe this difficult time may be Puerto Rico's best chance to reshape the island for the better.

"We have gotten stronger," Migdalia Luz Barens told us as the group gathered around a table in Old San Juan. "If anyone had a doubt, any doubt, that Puerto Ricans are struggling on their own — this is a country that has been fighting for its freedom forever."

Maria, she said, has forced Puerto Ricans to realize they're on their own. Everyone at the table agreed they'd rather be an independent country.

"Puerto Rico is a colony of the United States, so you can't separate that. It's part of, you were born in a colonized country. In the context of Maria, it's about realizing that you're on your own. That your government won't do the work. The country that has colonized your country won't do the work," Barens said.

What about the billions of dollars in federal aid sent to help the island recover?

"A lot of people contributed money towards Puerto Rico and its recovery. Where's the money? When we still have people without power or potable water, for that matter?" Mariangel Gonzales said.

Governor Ricardo Rosselló says part of the problem is that even though the island's residents don't have a voting representative in Congress, Puerto Rico still gets its marching orders from Washington, leaving it powerless to pick up the pieces on its own.

"It's been a long recovery process," he told CBS News. "But there is an opportunity now for a strong rebuild."

"We got assigned $18.5 billion on the supplemental [federal budget] and $2 billion of that goes towards energy, but the rest goes to housing projects, to rebuilding roads, schools and so forth."

Begnaud asked about the brain drain from residents like Damarys deciding to pick up and move: "You've got really intelligent people who are leaving this island. How do you stop that?"

The governor's plan relies heavily on the billions of dollars the U.S. government has promised. But many residents who've applied for FEMA aid have been denied because, for one reason or another, they've been unable to prove they own their home.

FEMA coordinator Michael Byrne says that by the one-year anniversary of the storm, the agency will have spent $14.2 billion, and the amount will keep on growing over time. That's far short of the $100 billion Rosselló has called for.

"Well, you don't need that $100 billion tomorrow. You need how much you can use deliberately to do the reconstruction effort right now. We just need to set up the programs and then see what do we need year-on-year to be able to make sure that we move forward with the reconstruction," Byrne said.

He also defended FEMA's response to the storm, which many have criticized for exacerbating the disaster.

"I don't buy that. First of all, I think that's just not the right thing to say to the 17,000 people that came here at the beginning and the early stages and spent every minute of every day working to restore and to provide assistance to the Commonwealth and the people of the Commonwealth. The 3,100 people I now have that are spending every day working to provide assistance."

Byrne acknowledges, "There were areas of shortfall that we've been honest about and we've identified and we're gonna work to get better."

One year after the hurricane, as Puerto Rico approaches its second decade of recession and faces over $70 billion in debt, dwindling resources and waning hope may be the new normal.

One economist working with the Financial Oversight and Management Board for Puerto Rico predicts that if the island loses another 1 million people, its population will never return to pre-Maria levels, leaving the Commonwealth a shadow of its former self. Based on the current rate of migration, that turning point could happen in as little as 25 years.

Troubling signs are everywhere. Six weeks after our interview, the head of forensic sciences at the morgue, Monica Melendez, resigned. She was the second director to leave in two months.

And as Damarys's moving date approached, she said an emotional farewell to her church community.

"God bless you. We're all passing through difficult situations, but this time I didn't allow my faith to be broken. I continued on to where God was sending me. Let me keep growing, as his daughter, to continue being a role model for my daughter. To give me good health, which I need to keep raising my daughter, and continue forward. Don't let go. I will not forget about you all." 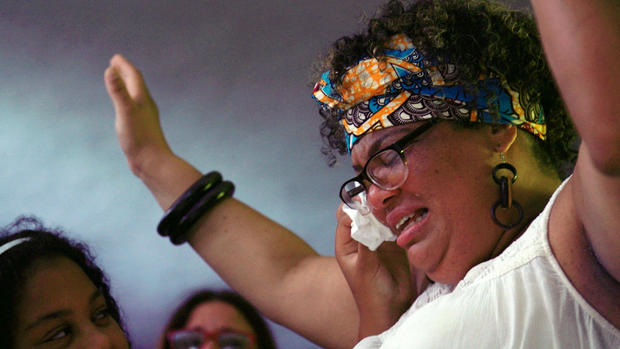 Hundreds of cars parked outside Yellowstone as park reopens after historic...

Crypto company out $137 million after passwords die with owner