The Twitter video went viral, showing Texas Democratic Senate candidate Beto O'Rourke criticizing police brutality against black men while speaking in a primarily black church. But it didn't come from O'Rourke or even a left-leaning news site — it was posted in a tweet by incumbent Republican Ted Cruz, who captioned it "In Beto O'Rourke's own words."

"How can we continue to lose the lives of unarmed black men in the United States of America at the hands of white police officers? That is not justice. That is not us. That can and must change," O'Rourke says in the video, to cheers and a standing ovation from the audience in the packed church.

The post is reminiscent of the viral video posted by NowThis in August, which showed O'Rourke passionately defending the rights of NFL players to kneel during the national anthem to protest against police brutality.

The tweet was in response to the first debate between Cruz and O'Rourke Friday evening, where Cruz claimed that O'Rourke said that police officers are "the modern Jim Crow," which O'Rourke denied and doesn't say in the video.

Instead of appearing as an attack on O'Rourke, the tweet read more like a campaign ad for his opponent.

Texas hasn't elected a Democrat to the Senate since 1988, and Cruz easily won the Republican nomination with 85 percent of the vote. But Cruz's campaign has struggled to match the star power of O'Rourke, who has a dedicated national following and has been profiled by several major outlets.

O'Rourke raised $9 million online alone in August, propelled by attacks from Cruz and President Trump. From Jan. to July 2018, O'Rourke raised $23.6 million comparied to $15.6 million raised by Cruz, which includes $4.3 million from affiliated PACs, according to the Texas Tribune.

A Sept. 12 poll by CBS Dallas-Fort Worth/Dixie Strategies showed Cruz had a majority of just 4 points, which fell within the margin of error. But most polls show Cruz ahead of O'Rourke, although generally O'Rourke trails Cruz by a margin under 10 points. The CBS News Battleground Tracker rates the race as Lean Republican.

In August, Cruz campaign spokesperson Emily Miller responded to a story in the Fort Worth Star-Telegram which compared the O'Rourke campaign slogan to the packaging of spicy ketchup from the popular restaurant chain Whataburger. "Unlike the spicy ketchup, when Texans unwrap the O'Rourke packaging, they are definitely not going to like what they see underneath. He's like a Triple Meat Whataburger liberal who is out of touch with Texas values."

While calling O'Rourke a "Triple Meat Whataburger liberal" was intended to be a stinging attack, it instead provoked confusion and amusement on social media. O'Rourke later skateboarded through a Whataburger parking lot. Moreover, Whataburger is extremely popular, so the criticism seemed counterintuitive to some.

The Texas GOP has also targeted O'Rourke on Twitter, with mixed results. A tweet with a picture of O'Rourke with his punk rock band had many on Twitter praising his alternative bona fides. Another post with O'Rourke's mugshot from a 1998 DWI invited comments that O'Rourke looked attractive in this picture.

Of course, winning the social media battle is not the same as winning the election. Cruz's video was not intended for centrists or liberals on Twitter. It was likely meant to inspire conservative Republicans to turn out, for fear that a liberal politician applauded for discussing police brutality in a black church could actually be elected. Mr. Trump's visit in October will have a similar purpose: to amp up Trump-loving voters who may not be inclined to vote since the president is not on the ballot. If Cruz can motivate his base to vote, he could counteract the enthusiasm for O'Rourke's campaign.

But even if he loses the race, O'Rourke has made a name for himself as a politician able to excite voters, live and on social media. After the debate on Friday, O'Rourke pulled into a Whataburger drive-through. While he was waiting, he played airdrums to the Who's "Baba O'Riley." A video of this was posted to Twitter by Washington Examiner reporter Alex Thomas. The video has garnered thousands of views.

The Cruz campaign has attacked O'Rourke for gathering national attention, something Cruz has struggled with even before this race. Fellow Republican Senator Lindsey Graham memorably said in 2016 that "if you killed Ted Cruz on the floor of the Senate, and the trial was in the Senate, nobody would convict you." Republicans have since rallied around their candidate in Texas, and President Trump is visiting the state in October to rally on Cruz's behalf. 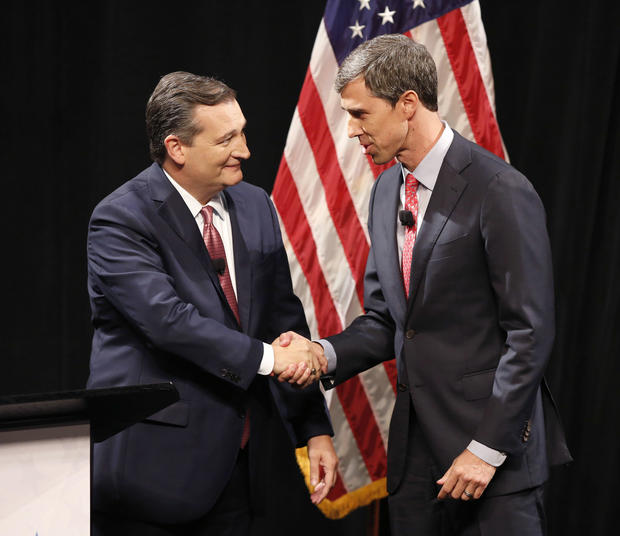 Trump campaign: We are “unconcerned” about challenger Weld

Trump thinks Boris Johnson “would be excellent” as prime minister