The money-losing cannabis company Tilray is finding that there's nothing mellow about the stock market.

Shares of Tilray plunged more than 25 percent in early trading on Friday, capping a wild week that's sent the Canadian company's shares into a volatile spin of ups and downs. Even with the decline, the company has a market value of $12 billion, making it more valuable than Macy's or Harley-Davidson.

The swift fall comes after wild trading earlier this week. On Thursday, the shares surged in early trading before sliding more than 20 percent by midday, lopping roughly $4 billion off its market value in a matter of hours.

Yet since going public on Nasdaq in July, the company's shares have jumped more than sevenfold, prompting comparisons with speculators' interest in bitcoin and other cryptocurrencies.

So what's lighting up investors about Tilray? Some of the fascination was fueled by news that a private equity fund backed by PayPal co-founder Peter Thiel holds 76 percent of its equity. Others are interested in the growing market for medical and recreational marijuana, as well as many other cannabis-based products. Coca-Cola, for instance, is reportedly eyeing beverages infused with CBD, the ingredient in marijuana that treats pain but doesn't get people high.

Still, Tilray has yet to turn a profit. Through March 2018, the company has lost more than $45 million, according to a regulatory filing. The company operates in countries where cannabis is legal, such as Canada and Germany, and sells through brands such as Goodship, an edibles company that makes CBD-infused cookies. 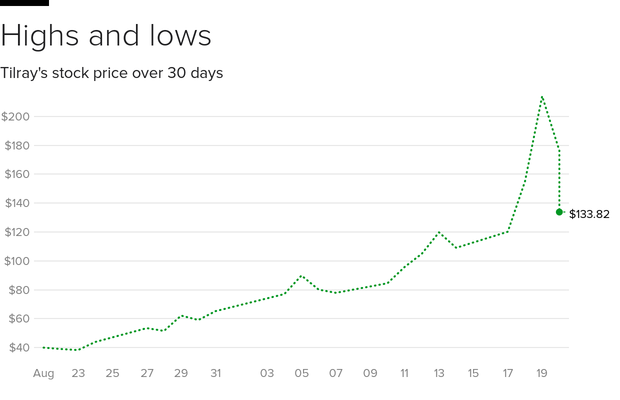 5G explained: How it works and when we’ll have it

Nearly 100 California companies have zero women on their boards