Tiffany Haddish told Stephen Colbert that she isn't sweating the fact that she's single. The "Girls Trip" comedian and recent Emmy winner has had a very busy past year, and she admitted that it's interfered with her dating schedule.

When Colbert asked her if she's had to give up anything in her personal life, she said, "I haven't been dating, so … I mean my relationships — personal relationships — haven't been that good, but I have been keeping up with my weighted blanket and my toys that I get off of Groupon." She smiled at the audience and added, "And batteries. Batteries are a girl's best friend."

Haddish laughed and said that the band looked like they had no idea what she was talking about.

Colbert said, "I'll add myself to that list." The TV host tried to take a safe route and asked Haddish about her weighted blanket.

She responded, "A weighed blanket is a blanket that's filled with like, sand, I'm not sure what the material is, but it's like 25 pounds and you can throw that over your legs and you spray a little cologne over it and you throw it over your arms and you feel like a man is holding you."

She mimed holding her weighted blanket and said, "And you snuggle up like this … and you open up your nightstand drawer, put your batteries there … and go to sleep!"

Colbert said hastily, "Exactly, because you've got your reading light. You gotta read your book before you go to bed. I do that, too."

Earlier in the sit-down, Haddish flirted a bit with Colbert and said, "I like this beard you got going on. They need to put you on Facebook on this thing called 'Beard Gang' … It's a bunch of sexy men in beards and sweatpants." 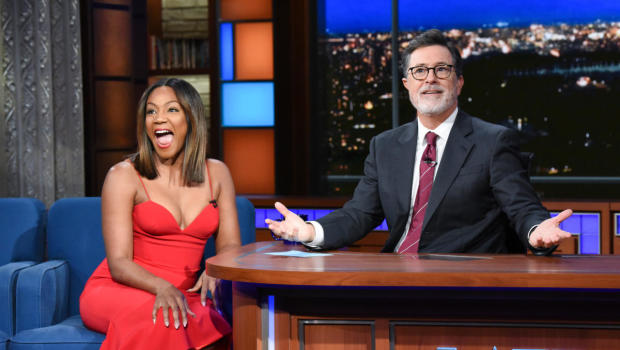