Stock prices suffered for months amid investors' worries about higher interest rates and President Donald Trump's trade war with China and others. But now a new record high seems inevitable as the Dow Jones industrials index pushes back toward its January peak, nearing the 26,600 threshold.

And although the trade issues continue to boil — including Mr. Trump's imposition this week of fresh tariffs on $200 billion worth of Chinese imports — investors seem just fine looking past them to bid up prices. Why?

One of the most striking characteristics of the market's recent rise has been how it stands in opposition to the weakness seen in other markets. From Germany to China, stock markets in both developed and emerging economies have been struggling.

It's easy to see why the U.S. has gone the other way: Fueled by last year's tax cuts and a ballooning federal deficit, U.S. GDP growth is tracking at a 4.4 percent annual rate for the current quarter following a 4.2 percent performance last quarter. Corporate profitability is strong. And consumer confidence is high.

Maybe trade wars really are "easy to win" after all. Or at least so far, things are proceeding smoothly.

Thus, the SPDR World ex-US ETF, an exchange-traded fund that tracks the performance of developed market stocks outside the U.S., is still down nearly 8 percent from its January high while U.S. stocks are on the verge of new all-time highs.

Money managers are on the scent. Bank of America Merrill Lynch's latest fund manager survey shows a multiyear preference for U.S. equities amid an economic and market performance that's "decoupling" from the rest of the world. Managers are allocating money to U.S. stocks within their portfolios at levels not seen since January 2015. The U.S. is now the most favored equity region globally for the second month running.

When fund managers were asked about their regional expectations for corporate profits, a net 69 percent said the U.S. was tops. That's a record 17-year high.

Digging in to the data, managers are keeping a specific focus within U.S. markets on the "FAANG" mega-cap technology stocks — although that can really be narrowed down to "AA" for Apple and Amazon recently, given the underperformance of Facebook, Netflix and Google parent Alphabet.

Yet the risk remains that the trade situation spirals downward from here and eventually becomes a drag on U.S. growth and corporate profitability.

That's especially a worry with the tariff rate on the latest $200 billion in Chinese imports set to grow from 10 percent now to 25 percent in January. Mr. Trump is also threatening another round of tariffs on the remaining $267 billion of Chinese imports if Beijing takes retaliatory action. And Beijing has vowed to do just that.

It's unclear if the president considers China's latest response, a tariff on $60 billion worth of U.S. goods at a 5 percent to 10 percent rate, as a triggering action.

Goldman Sachs doesn't expect an agreement between the U.S. and China that could reverse these actions until after the midterm elections on Nov. 6. And it expects Mr. Trump will indeed launch another round of tariffs within the next few weeks to take effect in early 2019, raising the stakes for a potential meeting between the U.S. president and Chinese President Xi Jinping at the G-20 meeting scheduled for Nov. 30.

Capital Economics, however, warns that the current market rally is merely a lull in the storm ahead of more aggressive U.S. trade action not only against China but others, including the European Union.

Indeed, earlier this week Mr. Trump asserted that the U.S. is being "ripped off" by the Europeans as well as China. If so, trade-sensitive stocks like Caterpillar and Boeing will be vulnerable. 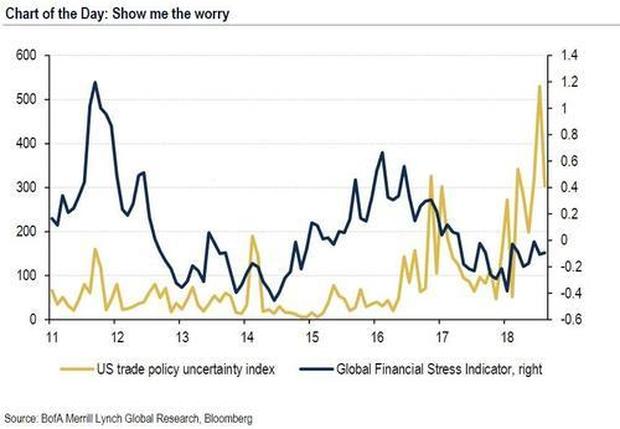