In a show of President Trump's staunch support of Saudi Arabia, his administration is mulling the possibility of having that nation's young leader, Crown Prince Mohammad bin Salman, speak at the U.S.-hosted UN Security Council meeting next week, according to sources familiar with its planning.

But now that the U.S. agenda has shifted away from a narrow focus on Iran, pulling off this diplomatic showcase will be hard to finagle.

Nikki Haley, the U.S. Ambassador to the UN, initially declared that Mr. Trump would host a UN Security Council meeting on "to address Iran's violations of international law" and its actions to sow instability in the region. But that meeting has since changed to focus more broadly on counter-proliferation.

"The purpose of this meeting is to discuss ways the Security Council can better enforce the resolutions it has adopted, which are built on international law pertaining to WMDs, to counter the spread and use of the world's most dangerous weapons," writes a concept note put together by the Trump administration, and obtained by CBS News.

The Trump administration holds the reins on the agenda for the meeting because the U.S. is chairing the Council this month. In the past, President Obama also took the opportunity to steer discussions when the chair, which rotates between member nations, came to the U.S.

If Iran had remained the focus, the country would have been offered a seat, and a voice, at the table. But now they will not, as administration officials wanted to avoid a possible confrontation between Mr. Trump and his Iranian counterpart, Hassan Rouhani. Now they say Mr. Trump will have more breathing room and, in theory, avoid getting bashed on the world stage for exiting the Iran deal.

"It is definitely better to move towards something more general on nonproliferation," says Ilan Goldenberg, the Director of the Middle East Security Program at the Center for a New American Security. "Because otherwise the administration was setting itself up for a confrontation with literally the rest of the entire Security Council. You'd have the president up there being a punching bag."

However, moving away from Iran as the meeting's focus also makes it logistically more complicated to secure a role for Saudi Arabia, which is not a member of the Security Council. At UN Security Council meetings, countries that are impacted by the conversation are allowed to participate, and that could have justified giving Saudi Arabia at the table if Iran had remained the primary U.S. focus.

One possible way to still justify Saudi Arabia's presence at the table is the country's current development of a civilian nuclear program, which could have applications in the medical and agriculture industries among other arenas.

"I think it would be great to have them in the meeting," said Katie Tubb, a policy analyst at the Heritage Foundation, explaining that they could increase their transparency that way. "The Saudis are trying to portray themselves as responsible users of peaceful nuclear technology. They are trying to pit themselves as [a counter to] Iran."

As of now, Saudi Arabia has not been invited to partake in the discussion. When asked about the possibility of inviting another country to speak at the meeting, a Security Council diplomat explained that "in theory" it could happen, but was not certain it would.

During the meeting, Mr. Trump will still look to shine a spotlight on Iran, although the broader nonproliferation focus will cover North Korea as well. Throughout his presidency, Mr. Trump has not held back when criticizing Iran, a regional rival of both the U.S. and Saudi Arabia.

But even after avoiding an embarrassing barrage of criticism for exiting the Iran deal, some experts say that putting Mr. Trump at the helm is still risky.

"I fear he has this image of one of his cabinet meetings where they have everybody saying nice things about him as they go around the room and he gets to be in chair. That is not happening in this scenario. I am waiting for sort of the grumpy Trump picture, of him with his arms folded," explains Goldberg.

"But if he actually starts stepping in and breaking protocol and saying things back or walks out super irritated and starts tweeting — that is a bad outcome, and just another message about how the president is fraying the international order." 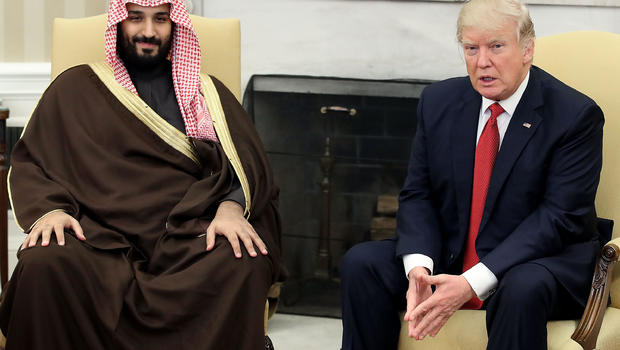 Pelosi distributes memo to House Democrats ahead of Mueller hearing