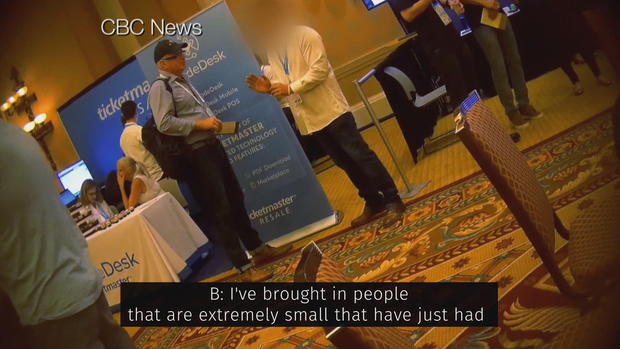 Ticketmaster is now accused of running what looks like an underground ticket scalping project that may be driving up prices and costing consumers millions. An investigation by the Canadian Broadcasting Corporation and the Toronto Star claims the box office giant is helping scalpers buy tickets and resell them with a secret program.

There's no federal law against ticket scalping but Ticketmaster has publicly opposed the practice in the past, reports CBS News' Vladimir Duthiers.

Wearing hidden cameras, journalists from the Toronto Star and CBC posed as scalpers at a major live entertainment conference in Las Vegas in July. That's where they found Ticketmaster representatives appearing to pitch a company-owned resale platform used by ticket scalpers.

"They have a secret scalper program that they don't talk about in any corporate reports," said CBC investigative reporter Dave Seglins. He's one of the reporters who went undercover as a ticket broker from Toronto. "What we discovered is they are selling something called TradeDesk, which is an online system….It's purposely designed for professional scalpers. It helps manage large inventories."

Here's how it works: scalpers set up fake accounts to buy tickets in bulk on Ticketmaster.com since the website limits how many tickets one person can buy. The scalpers then sell those tickets at inflated prices on TradeDesk.

When CBC's undercover reporter asked a Ticketmaster representative whether the company will police the use of multiple accounts, he said, "No. I have a gentleman who's got over 200 Ticketmaster.com accounts."

"I'm hoping from an investigation like this, we're really bringing transparency so that people could look at this and ask whether this is right, moral, ethical, legal," Seglins said.

In a statement to the Toronto Star and CBC, Ticketmaster says in part that it offers "a safe and fair place for fans to shop, buy, and sell tickets" and that it operates that "marketplace more transparently and securely than any other." Ticketmaster and its parent company, Live Nation, have not returned CBS News' requests for comment. 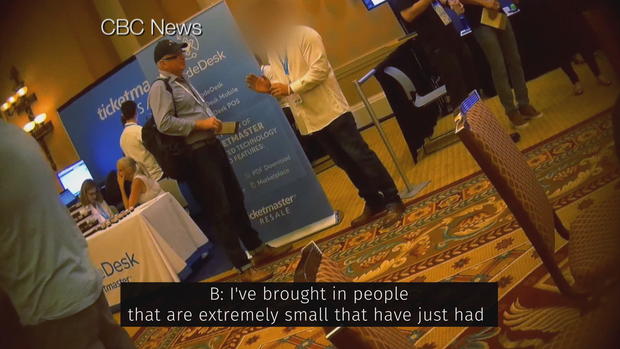