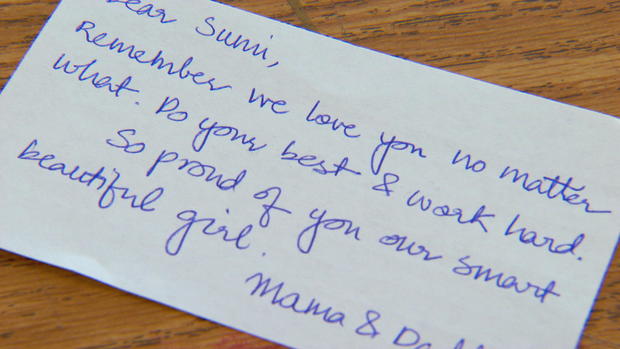 CBS News September 20, 2018, 9:56 AM Teacher has parents write notes for their middle schoolers to read on a rough day

Our continuing series, A More Perfect Union, aims to show that what unites us as Americans is far greater than what divides us. As the school year starts, students are adjusting to new surroundings and added pressures, all of which can lead to anxiety.

Nearly 32 percent of adolescents in the U.S. suffer from anxiety, according to the National Institute of Mental Health. One teacher at Waddell Language Academy in Charlotte, North Carolina, had parents write a special note to their child to read on a hard day. CBS News' Dana Jacobson visited the school to see how the small gesture is making a big difference.

Anyone who remembers middle school knows the difficulty of balancing schoolwork, peer pressure and growing pains. Seventh grade language arts teacher Justin Parmenter asked his student's parents to compose handwritten notes to help ease those anxieties by bridging the barrier between school and home.
"This is an activity that helps to bring down that barrier a little bit and bring parents into the classroom in a way and show the child that we understand you need support in a lot of different ways," Parmenter said.

"I thought it's a fun idea but then when I saw what my wife and I were putting down on a card and then thinking through what impact this can have for my daughter when she was having a bad day," said parent Jason Carey.

Tricia Freeman wrote to her son, Marcus, "This card says I'm so happy for you. Which might seem funny on a day that isn't the best. You shine, son."

"Knowing that he was going to get this card and that I was going to have an opportunity to say something to him that I probably wouldn't have. It's just really special to me," Freeman said.

"It really tells me a lot about that teacher and how he sees the kid not just as a student but he sees them as a whole," another parent said.

The school's emphasis on language diversity is reflected in the notes the children receive from their parents. Thirteen-year-old Carmen Escalante's mother wrote her note in Spanish. Reading it brought Carmen to tears.
"Because she wrote it with love and she says you can always count on me and that you have to fight hard for what you want," Carmen said, explaining why it made her cry.
"Why did it matter that it was from their parents?" Jacobson asked Parmenter.

"I knew that at that moment when they really needed a boost that they will be able to hear it in their parents voice and it would feel like it was you know their parent speaking into their ear and telling them what they needed to hear," Parmenter said.

One student's note read, "No matter what happens today I will always love you and be there for you. My hug is waiting for you when you get home." That student nearly cried, too.

Parmenter says he's received support from all over the country. Teachers from India and Australia also said they were inspired to do the same in their classrooms. 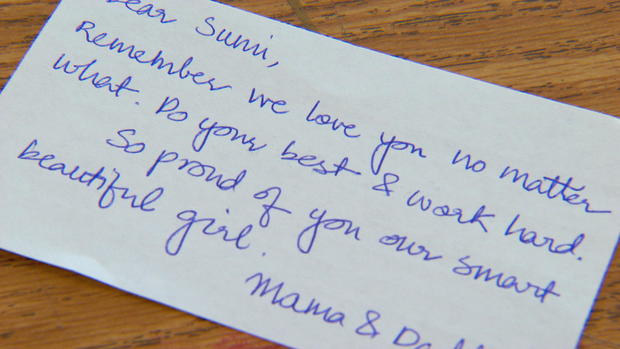