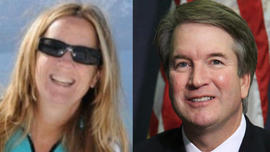 By Nancy Cordes CBS News September 20, 2018, 6:33 PM Christine Blasey Ford willing to testify about Kavanaugh allegations on her own terms

WASHINGTON — Dr. Christine Blasey Ford, the college professor who says she was sexually assaulted by Brett Kavanaugh when they were teenagers, is now willing to testify before the Senate Judiciary Committee next week. But she won't do it on Monday — the chairman's take-it-or-leave-it date — and she has certain conditions.

As supporters of Blasey rallied on Capitol Hill and in her California hometown, Ford's lawyers issued their latest salvo, telling the Senate Judiciary Committee that "she wishes to testify, provided that we can agree on terms that are fair and which ensure her safety." It also says: "Her preference continues to be" however "a full investigation prior to her testimony."

Republicans have rejected her request to bring in the FBI, saying the Judiciary Committee can do its own investigation. But Iowa Sen. Chuck Grassley, the committee chairman made it clear who he believes, informing Democrats in a letter that Kavanaugh "sat for a transcribed interview on Monday" and "we have no reason to doubt the truthfulness of judge Kavanaugh's testimony."

Kavanaugh has been prepping all week for the possibility of a public hearing and denies Ford's claim that he "groped" her and "put his hand over her mouth" at a high school party in the early 1980s.

Late Thursday afternoon, graduates of the all girls Holton-Arms School delivered a letter of support for Ford signed by more than 1,000 alumnae to the congressional office of West Virginia Republican Sen. Shelley Moore Capito, a fellow grad.

CBS News spoke to Karen Bralove from the class of '63, and asked if it's possible to get to the truth, more than 30 years later. 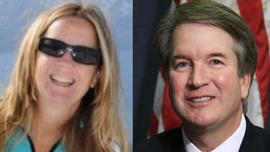