Fans eagerly awaiting the arrival of "Star Trek: Discovery" Season 2 will have the chance to whet their appetites. On Thursday, CBS All Access announced that it is releasing "Star Trek: Short Treks" in October, a series of four short stories in the "Star Trek" universe.

Each short episode will run 10 to 15 minutes. In a statement, CBS All Access said, "Each short … will be an opportunity for fans to dive deeper into key themes and characters that fit into 'Star Trek: Discovery' and the expanding 'Star Trek' universe."

Each mini-episode will focus on a key character. Rainn Wilson directs the short about his own character.

Here's CBS All Access' schedule for "Short Treks," along with the streaming service's descriptions for each installment.

Onboard the U.S.S. Discovery, Ensign Tilly (Mary Wiseman) encounters an unexpected visitor in need of help. However, this unlikely pair may have more in common than meets the eye. Written by Jenny Lumet & Alex Kurtzman. Directed by Maja Vrvilo.

After waking up in an unfamiliar sickbay, Craft (Aldis Hodge) finds himself on board a deserted ship, and his only companion and hope for survival is an A.I. computer interface. Teleplay by Michael Chabon. Story by Sean Cochran and Michael Chabon.Directed by Olatunde Osunsanmi.

Before he was the first Kelpien to join Starfleet, Saru (Doug Jones) lived a simple life on his home planet of Kaminar with his father and sister. Young Saru, full of ingenuity and a level of curiosity uncommon among his people, yearns to find out what lies beyond his village, leading him on an unexpected path. Written by Bo Yeon Kim & Erika Lippoldt. Directed by Douglas Aarniokoski.

Harry Mudd (Rainn Wilson), back to his old tricks of stealing and double-dealing, finds himself in a precarious position aboard a hostile ship – just in time to try out his latest con. Written by Michael McMahan. Directed by Rainn Wilson.

Watch a teaser for "Star Treks: Short Treks" below.

In August, CBS All Access announced that Patrick Stewart will reprise his iconic role of Jean-Luc Picard in a new "Star Trek" series. The still-unnamed series will explore the "next chapter" of Picard's life. 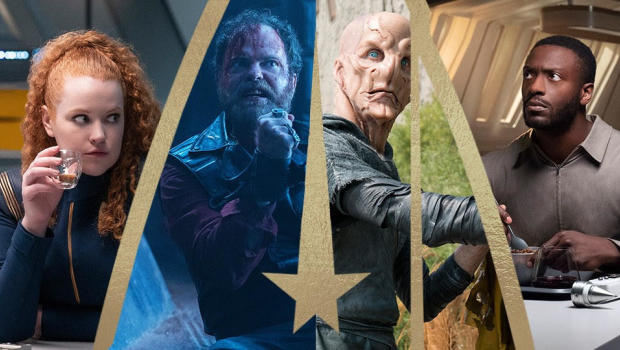